M is for Munchers: The Serial Killers Next Door 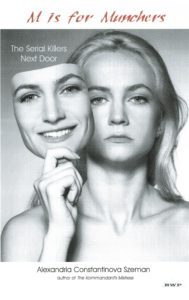 Black Widow serial killers usually murder husbands, lovers, boyfriends, children, and even boarders for insurance proceeds, inheritance money, or Social Security checks. Medeas kill their children to punish their ex-husbands or to otherwise manipulate the men in their lives.  Angels of Death kill those who are dependent upon their care — in hospitals, nursing homes, or in private care — often murdering them with drugs or in ways that are undetected by medical examination. Team Killers work with a partner or in a group, and one person usually blames the other part of the team for all the violence and killing.

The most dangerous category of female serial killers are the women who viciously abuse, torture, and often kill their own children, children in their care, or others who are entirely dependent upon them. Posing as ideal mothers and self-less caregivers, these female serial killers practice Munchausen’s by Proxy (MBP), an incurable personality disorder where the woman intentionally and repeatedly sickens, injures, tortures, abuses, and kills her victims in order to get attention, respect, admiration, and love for herself.

Often called “Munchers” by those in law enforcement and the medical establishment who eventually discover the terrible truth behind the illnesses, injuries, and deaths of the children and others in their care, women who practice Munchausen’s by Proxy are the most dangerous of all serial killers because they operate openly, virtually flaunting their crimes while appearing, at the same time, to be completely and unquestionably innocent.

They are the serial killers next door.

5/5 “Outstanding”
“Hard to put down”
“Szeman demonstrates that the blackest, darkest cloud
can have a silver lining in her own formidable achievement”
Judge, Memoir/Life Stories
24th Annual Writer’s Digest Self-Published Book Awards 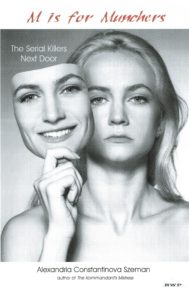 Read an excerpt (chapters 1-6) from
M is for Munchers:
The Serial Killers Next Door

Get M is for Munchers: The Serial Killers Next Door ebook free now
https://geni.us/MisforMunchers

Read M is for Munchers: The Serial Killers Next Door
free any time with Kindle Unlimited

Editorial description for M is for Munchers: The Serial Killers Next Door © 2002, 2007, 2014, 2017 by Alexandria Constantinova Szeman & RockWay Press, May not be reprinted or excerpted without written permission. Please do not support piracy of Intellectual Property.