The day I found out my Mama and Daddy done lied to me was the day of the church picnic. Mama done went off early in the morning, to be with her pies and her lady friends. Daddy carried us there later, just before lunch. He pulled right up to the front gate, and give us each a quarter.

Annabelle Lee and Clyde Junior they just jumps right outta the car, before he even finishes talking. You sure cain tell they’s twins. Even though they’s boy and girl, they’s identical selfish. To the very bone. My own self, I am more polite. I waits till he finishes before I opens the door.

‘Course Annabelle Lee and Clyde Junior don’t pay him no never mind. They’s already at the gate, jumping up and down in fronta the preacher, almost wetting they own selves in they excitement. I act more dignified. More growed-up. Lotsa folks is pushing through the gate. Some of them boys ’bout run me down, and don’t even say ‘scuse me neither: they’s just like the twins. Lotsa folks knows Mama and Daddy, and they all says, “Hey.”

After ’bout three-billion-trillion “parking the cars,” I starts to wonder what in tarnation is taking Daddy so long. Don’t take that long to park no car, even if it is a big brand new one that he parks real far from all the resta the cars so it don’t get no dings nor dents nor scratches in its brand spanking new $25 paint job. Annabelle Lee and Clyde Junior starts in whining and crying like dogs got they tails stepped on, and says they gotta go find Mama.

“Don’t you be going nowheres,” I says. “Daddy done tole us to wait by the front gate.”

“We going over to be with our own Mama,” they says.

And they runs theyselves off before I cain even grab aholt of they collars. ‘Course they don’t come back. Didn’t I tell you they’s selfish? Ain’t got no respect, them two. Why if I’d done that kinda disrespecting when I was they age, I’d been whupped for certain. Them, they’ll probably get no more’n a mean look and a “I tole you two don’t you do that no more.” But you cain bet that ain’t gonna stop them two none.

After a while, I get kinda tired of waiting on Daddy.

“How long’s it take to park a car?” I asks my own self, and I decide it don’t take near as long as he’s been gone. I reckon I best go look for him and fetch him into the church yard.

Finally I finds the car. Daddy ain’t there, but the door is open. Now this is mighty particular. Daddy don’t never go nowhere away from the car and leave the door open. I figures he gotta be standing somewhere, jawing with the fellas, but I sure ain’t seeing him nowheres.

I reckon he done forgot about us standing by the front gate like he done tole us to his very own self. I reckon by this much time past he’s over to the pies where Mama is. ‘Course Annabelle Lee and Clyde Junior done tole him by now how I was the one who run off and left them by they own selves so they was forced to come find Mama so they’d not be all alone just the two of them just them two little twins all by they own selves in the middle of the church picnic all by they lonesomes. I cain just hear it now. I closes the car door, drags my feet, kicks at some of them little rocks that is so nice for throwing, and walks my self on back to the church yard gate.

All a sudden, folks is running. Men-folk mostly, but some women-folk, too. Running past me, in the direction I just come from. Funny looks on they chalk-pale faces. So I runs, too.

They runs they selves back toward the very furtherest side of the church parking lot. Where it is all grass, and none of them little rocks at all. They’s all running to the little boys’ room. And they’s all going right in, too, all of them: they just running they selves right in to the little boys’ room. Even the girls and the growed women who I knows cain read. So I goes on in, too.

Right away, sure as I’m born, without nobody saying nuthin at all to me, I knows something powerful bad’s done happened. The looks on they faces is something awful. And it’s real quiet in there. But it ain’t quiet like church-quiet come Sunday morning. No, it ain’t like that. It’s bad-quiet. Some of the women-folk is shaking they heads. They got they hands over they mouths. In they hands which is over they mouths, they got they flower-stitched handkerchiefs. The men-folk is shaking they heads, too. They’s talking real low to they selves. And everybody that done run they selves over here is all standing in front of this here one stall.

One of the more growed boys wearing tore overalls is holding the door open. So everybody cain look right in. Now that don’t seem at all right to me, but then Mama and Daddy done always tole me I ain’t even allowed to go into the little boys’ room, but here I am, clear as daylight, nobody not a single person on God’s green earth stopping me. That’s ’cause they’s all too busy with they eyes looking in the stall where the boy in the tore overalls is holding open the door. So I looks, too.

A growed man was there, with his pants full on, kneeling on the floor, his backside sticking out at all of us, his head down in the toilet. For the life of me I cain’t figure what he’s doing like that. ‘Specially with everybody in the whole entire world in the universe standing there gawking at him. Don’t he hear all of us? Don’t he notice that the door is being held wide open?

“He’s dead,” says one of the men-folk to another.

“How can y’all be so disrespectful?”

“Shouldn’t we do something?”

“Cain’t we at least lay him down?”

All the men-folk looks at each other but nobody moves.

That man is my Daddy.

But my Daddy is in the little boys’ room on the other side of the parking lot at the church picnic. My own Daddy is kneeling on the floor with his head stuck in the toilet and some boy with tore overalls is holding the door wide open so everybody and his brother cain see and all the folks is standing ’round shaking they heads and whispering “how sad how awful dreadful sad” while my own Daddy is kneeling there not moving nary a little finger and I my own self am standing there with my mouth hung open wide enough for a bird to build its self a nest in not saying no word not no single word at all.

I reckon it must be for a fact, what they been saying about him being dead.

“Oh, my God, oh, sweet baby Jesus,” they says as they kinda push-pulls me out of the little boys’ room, out into the parking lot where the grass is all tramped down from all the folks running they selves over here, out where the dried-up grass turns its brown self into them little rocks which is just the right size for throwing, out where the sun is shining hot enough to fry a egg without no skillet.

But I cain’t feel nuthin. Not even the sun beating down on my head.

I cain’t see nuthin neither. ‘Cept that little blue patch with white stars in the shape of a heart.

And I cain’t hear nuthin ‘cept big words and Mama crying hard enough to choke her self and Annabelle Lee and Clyde Junior crying even harder till somebody finally done picks the twins up and takes them over to a neighbor’s house which is nearby the church yard.

I cain’t hear nuthin but weeping and wailing and growed doctor words like “mass-of-corn-airy” and “corn-airy-fail-your” and “They’s St. Jerome Miliani’s widow and orphans now,” but they all means the same thing.

And dead means forever. Dead means forever and ever till the end of the world. Dead means no cake on your birthday with one more candle than you done had last year, and no powder-smelling Mama to kiss both your cheeks and your forehead at night so’s you can sleep with pretty pictures, and no rides up to your own warm bed at night on Daddy’s shoulders, the Daddy you love more’n anything else in the whole wide world around and who you want to marry your own self when you’s all growed up.

Dead means till Jesus his own sweet self comes back to raise you up from the ground where you’s laid for hundreds or thousands of years and takes your sweet lonely old bones up to heaven to match them with your skin. Dead means darkness and coldness and shivering and loneliness. Dead means never ever again. Dead means nuthin at all for the rest of your whole entire life on earth.

Dead means you done found out your very own Daddy lied to you.

‘Course, I coulda forgive him for that.

But he ain’t never give me no chance to. 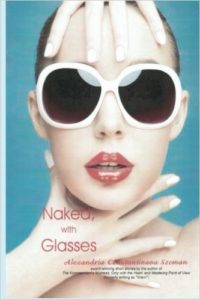 Read excerpts from Naked, with Glasses

Naked, with Glasses (the story)

This is how the plan to kill your husband could begin. You come home early from work. You have a headache. A terrible headache. The ...
Continue reading

When I was little, Mama and Daddy tole me nobody but old folks died. Before I was even growed, I found out my Mama and ...
Continue reading

They lied when they said I killed my mother, but that didn't stop Betty from leaving me and taking the kids. She even flipped me ...
Continue reading 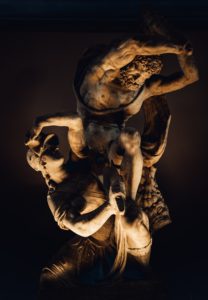 Rebellion in the Promised Land

Frankly, he's beginning to frighten us. We had to make a decision among ourselves. He's changed, and we don't like it. Hadn't we just escaped ...
Continue reading

Those eyes of his snared me like a fish, dragging me out of my life and into his. Now, when I look at all the ...
Continue reading

In the Path of the Juggernaut

“When, in all the years I’ve been stationed in this hideous desert province, when have you known me to actually hear one of these cases?” ...
Continue reading

Naked, with Glasses: My Journey from Poet to Fiction Writer

I started my writing career as a poet -- if you don't count the stories I wrote and tried to sell when I was 12 ...
Continue reading

Read Naked, with Glasses
free any time with Kindle Unlimited

—
Naked, with Glasses
© 1993, 2004, 2007, 2013 by Alexandria Constantinova Szeman.
May not be reprinted or excerpted without written permission.
Please do not support piracy of Intellectual Property.