Love is a Many Zombied Thing

Get Love Is a Many Zombied Thing  now!
https://geni.us/ZombiedThing 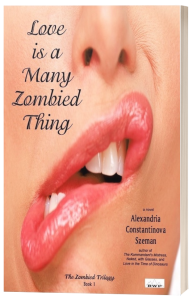 In a post-Z-fected world, Jake is just an ordinary guy, although slightly more educated and a bit better looking than most young men his age. He has a good job, a nice car, a great apartment, and a relatively pretty girlfriend. He knows all about how to protect himself from the Zombies who would eat the brains of every uninfected human on the planet if their own Z-fected brains functioned any longer and they could figure out how to get past the fence barricades that separate the two groups.

Jake has his life all planned out — at least, as much of your life as you can plan when Zombies have been in existence, attacking and killing humans, for several generations. When he unexpectedly becomes so severely ill that his job, relationship, and life are in jeopardy, he’s supremely grateful to the girl who steps in to nurse him.

Though he knows Goth-girl Windy only slightly, as one of the waitresses from a Downtown restaurant he frequents, she is more attentive and solicitous during his illness than his current girlfriend. Something draws Jake to Windy, though he’s not quite sure what it is. Something unusual. Something that makes her unlike any other girl he’s ever known. He thinks that, given the chance, he could love her enough to make a life commitment, something he’s never even considered before.

Unfortunately for Jake, Windy is a Z. A Zombie passing as an uninfected human. No one seems to suspect her secret. When Jake realizes what Windy is, his entire world is tilted off its axis. Despite the fact that she has to eat brains in order to stay alive, Windy seems just like any other girl Jake’s met. Except she’s more attractive, smarter, and more independent. She’s the woman of his dreams.

Now Jake’s greatest fear is that, as a Z, Windy couldn’t possibly feel the same way about him. The governments have taught everyone that Zombies cannot even communicate with each other, let alone with humans. The World Health Organizations preach that Zombies cannot think or feel any emotions. And the paramilitary Z-Squad, whose job it is to hunt down and kill any stray Zombies, believe that the only good Zombie is one with no head, one that’s been sent into the Void, never to shuffle and roam this earth again. Jake doesn’t care about any of that now. His only concern is to determine whether there is any way for this poor Romeo to cross the Z-barrier that divides him from his own special Juliet.

Meanwhile, Windy has her own fears.

She has a secret far greater than her being a Z who’s passing as a human.

And if Jake discovers it, he might send her into the Void himself. 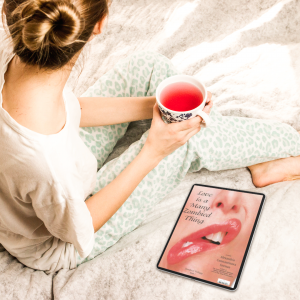 Read an excerpt from
Love is a Many Zombied Thing

Get Love Is a Many Zombied Thing  now!
https://geni.us/ZombiedThing

—
Editorial description of Love is a Many Zombied Thing © 2015 by Alexandria Constantinova Szeman & RockWay Press, May not be reprinted or excerpted without written permission. Please do not support piracy of Intellectual Property.