When you’re suffering, that’s when you’re most real.

Westworld continued its exploration of good and evil in “Chestnut,” episode 2 of HBO’s new hit series. With Dr. Ford (Anthony Hopkins) as the lonely and perhaps somewhat bored God of this world populated by robots, wealthy tourists, and scheming corporate climbers, Westworld goes far beyond the 1973 film of the same name. Though some of the themes were put in characters’ mouths in the second episode, thus hitting the viewers in the face with things like “you can be whoever you want to be,” most of the show was exciting and terrifying. Especially to the hosts in the Westworld theme park. 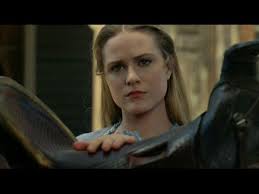 Dolores (Evan Rachel Wood) began to have memories: she also began waking from “dreams” or “nightmares,” which the hosts ostensibly have in case anything remains when their previous lives are “erased.” These nightmares exist to explain any “memory” that doesn’t fit into current scripts. The only problem is that these nightmare memories are coming when the hosts are “awake,” standing in the middle of town, for example, or when they’re trying to work. 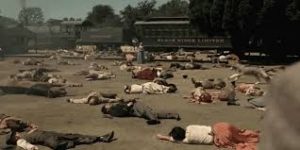 Dolores is seeing a carnage of dead bodies in town, when she’s fully awake, and waking in the night to go outside and dig up a buried gun. Did Dolores put it there? If so, when? Why?

Dolores also repeats something her father said just before his “breakdown.” These violent delights will have violent ends, Dolores says to Maeve, which Maeve doesn’t understand at all. 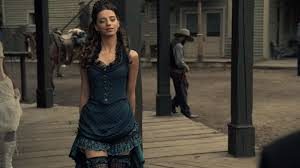 The nightmares are keeping Clementine (Angela Sarafyan) from sleeping, 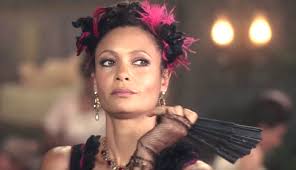 and causing Maeve’s (Thandie Newton, above) work performance to deteriorate to the point where she’s pulled in for evaluation. Feminist programmer Elsie (Shannon Woodward, below) thinks there’s nothing wrong with Maeve besides the poor performance of the “guys at the body shop.” 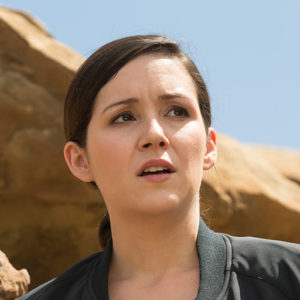 Still, something’s up with Maeve, who, along with Dolores, is “remembering” other lives, other violence, other pasts.

In a non-whore life memory, Maeve recalls a daughter, 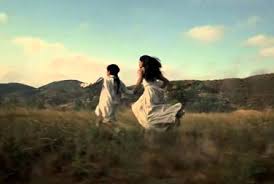 a violent attack by Indians, 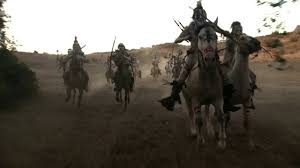 and arming herself for protection, 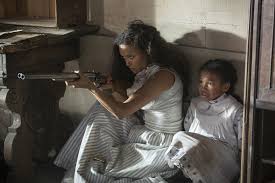 but when the door to her cabin opens, it’s The Man in Black. 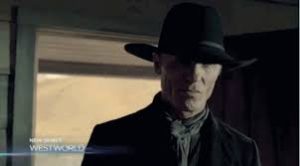 The Quest of The Man in Black

As Dolores and Maeve are experiencing nightmares and flashbacks to previous lives from alternate storylines, The Man in Black (Ed Harris) is searching for the “pattern” to all life. It’s one of the reasons he keeps returning to Westward, he insists. Life in the real world is nothing but chaos, nothing but accidents, he tells Lawrence (Clifton Collins, Jr, below, opposite Harris), whom he’s saved from a hanging, but life in Westworld reveals patterns. The Man in Black wants to know the meaning to life, the meaning to these patterns. 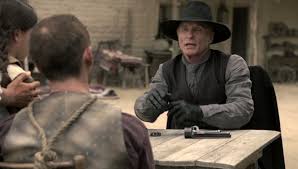 The Man in Black believes that The Maze will reveal the meaning of life. The image of the “maze” was tattooed under the scalp of Kissy, whom The Man in Black murdered and scalped. 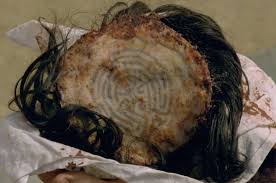 Observant viewers noted that the tattooed maze resembles the robot-manufacturing center where Dr. Ford was watching his creations being made, 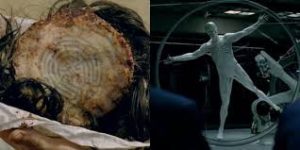 which alludes to Leonardo’s famous Vitruvian Man, an ideal of the Roman architect Vitruvius, who believed the human body was the model of perfection, and that the proportions of temples should be based on the human body with arms and legs extended fits into the “perfect geometric forms”: the circle and the square. 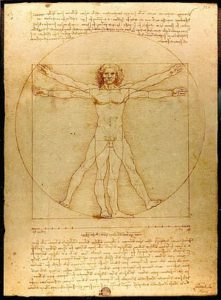 Lawrence claims not to know anything about any Maze, nor how to find the Maze, but his daughter says, “The Maze isn’t meant for you.” After The Man in Black kills her mother, claiming that this time in Westworld, he’s never going back (to his life outside the theme park), Lawrence’s daughter tells him how to find the Maze’s entrance: “follow the blood arroyo to the place where the snakes lays its eggs.”

Though the violence of The Man in Black is noted at HQ, employees are told that this guest gets whatever he wants, no matter how much work is causes for those who have to repair the hosts. Money talks, I guess, even at a theme park. 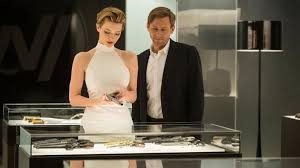 Meanwhile, Newcomer William (Jimmi Simpson, above R, below L) and his colleague Logan (Ben Barnes, below R), arrive in Westworld, where guests are told there’s no itinerary, no guidebook, only their own choices and learning curve. 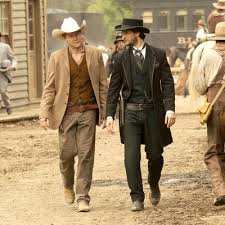 Logan already knows this, since he’s been there before, and already knows what he wants to do to have a good time, but William is hesitant and seems uncomfortable in the theme park, though obviously he’s paid good money to be there. He wants to interact with injured hosts, but not with Clementine because he has a “real” love and relationship elsewhere. Clementine misinterprets this statement to mean simply that he’s in love with someone else and doesn’t want to sleep with a whore, not that she’s not real, and his love interest is a real girl.

I’m guessing William is going to be part of a larger storyline, one where he tries to help hosts in distress, like Dolores. After all, they spent an inordinate amount of time drilling it into viewers’ heads that Westworld is all about the newcomers/guests’ choice and letting him choose a hat, with only two color options: black and white. He chose white, as you can see in the photo above. (Aside from pointing out the obvious symbolism in William’s storyline to viewers, the second episode “Chestnut” was very well done.) 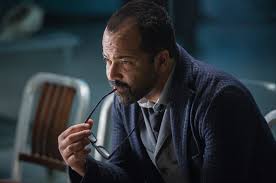 The hosts aren’t the only ones in distress. Head Programmer Bernard (Jeffrey Wright) chides Dr. Ford every so slightly for not informing him how difficult it is to “put away” the creations. Later, it’s revealed that Bernard wasn’t in his office, so Cullen (Sidse Babitt Knudsen) seeks him out at his residence. 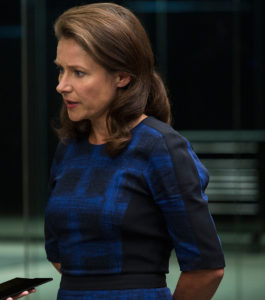 Seems the two are having an affair, even if it’s not love, which lends a lovely irony to Bernard’s remarks about Cullen’s facial expressions when she’s angry but trying not to show it, and to his request that he record her facial movements (which she denied).

And why wasn’t Bernard in his office?

Because, apparently, Bernard’s been having inappropriate discussions with Dolores. He tells her that she needs to make sure that no one else discovers that they’ve been meeting, or, more important, what they’ve been talking about. Dolores asks if she’s done something wrong, and he assures her that she has not. Then, in a moment that reveals that Dolores is beginning to be capable of independent thought and logical  reasoning, she asked if Bernard’s done something wrong.

Seems Bernard’s not the only one screwing things up at Westworld. When Maeve is sent in for some adjustments, which involve discovering the source of her “physical pain complaints,” the techs discover something in her abdomen: MRSA, which is, as another reviewer pointed out, a reference to Methicillin-resistant Staphylococcus aureus, aka a “super bug.” So not only can the hosts get a human infection, the techs can miss it, leaving the hosts to suffer.

And when Maeve wakes up during repairs, grabs a scalpel, and runs off, finding a holding pen of sorts, filled with a bunch of bodies, that looks super-ominous, 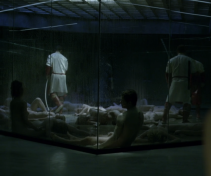 the techs are more worried about their jobs and about getting disciplined than about any repercussions to Maeve.

After all, she’s not sentient, right? 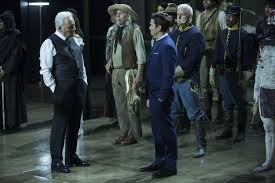 Now throw in the ever-dissatisfied Sizemore (Simon Quarterman, above, center) who gets his latest and greatest narrative “rejected” by Boss Ford, and you just know there are going to be more rumblings in Westworld. 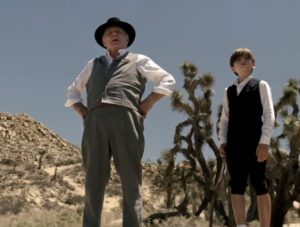 As if it’s not enough having all the political maneuvering, tech mistakes, and brain-tripping going on at Westworld, the Head-Honcho, Dr. Ford (Anthony Hopkins), is totally bored. Yeah, I know he’s God, but he’s so bored, he wakes up original now-decommissioned robots to have a drink with them. He gets into philosophical, existential discussions with Bernard. He goes out walking in the desert, controlling robot rattlesnakes. Yeah, God is bored in Westworld.

On his desert walk, Ford is accompanied by a little boy who seems to be a guest, but who later seems, instead, to be Ford’s little robot-grandson-tag-a-long. Yeah, Ford is bored beyond belief. It’s not enough to add “reveries” to the hosts to make the robots seem more “natural,” and it’s not enough to have some building with a cross and a bell — a church in the desert? — as part of his newest invention. It’s not even enough to have some little hero-worshipping kid following you around the desert being in awe of every move you make.

Because, as Ford wearily reveals, “Everything in this world is magic, except to the magician.”

His creations are having nightmares and questioning the very nature of their existence, his employees are messing around with each other as well as with the hosts’ heads, but “God” is  just plain bored.

You just know that this is not going to end well.

2 Responses to Dreams & Nightmares in Westworld