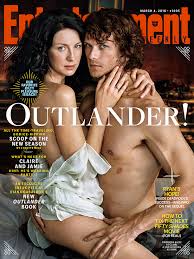 With the publication of the notorious Entertainment Weekly cover featuring Caitriona Balfe and Sam Heughan, who play Starz’s Outlander‘s time-travelling Claire and her Scots husband Jamie, I foolishly imagined that the second season was going to be an in-depth exploration of their loving and sexually ignited relationship. You know, the thing all the book readers claim is at the core of the books, though it’s mostly absent from the show (except for a few episodes, like the Wedding one) and absent from Book One in the series. Alas, season 2 has proven a disappointment in that regard, leaving me once again to wonder where the show is going, and how many of the Starz Outlander writers have actually read the best-selling books by Diana Gabaldon that the fans so vociferously love. 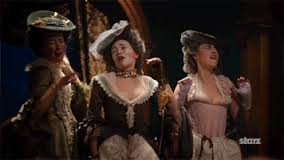 In any event, while Jamie is playing Bond, James Bond in the brothel, Claire (Caitriona Balfe) is making friends with Louise, who has a caged pet monkey, and who reveals the latest de rigeur French “beauty treatment”: a Brazilian Honey-Pot. 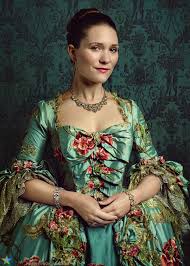 Louise also takes Jamie and Claire to Versailles, where Claire wears a dress of her own making, or at least of her own design. A dress that leaves little to the imagination. And one that stands out oddly at the French court, where everyone else is wearing florals and lace. 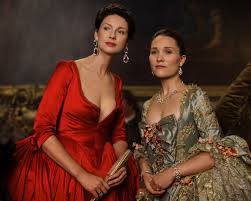 There, Jamie gets to stand in the all-male audience that watches King Louis 15th attempt to defecate into a royal throne-chamber-pot, while giving advice to eat “porridge.” Very exciting stuff for our Scottish Lord Jamie.

Meanwhile, Claire runs into the dastardly Duke of Sandringham and meets his secretary, Alex Randall, younger brother of the villainous Black Jack (Tobias Menzies). The Duke’s secretary reveals that BJR is not dead, and then Claire worries — needlessly, as it will be revealed later — about Jamie’s discovering that his nemesis and rapist is still alive. 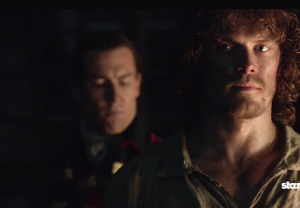 The bulk of the episode centered around Jamie’s inability to perform sexually with his wife, due to flashbacks of his rape at the hands of BJR. Whenever Jamie attempted to be with Claire sexually, her face grotesquely morphed into that of his rapist. Whom Jamie then repeatedly “stabbed”. 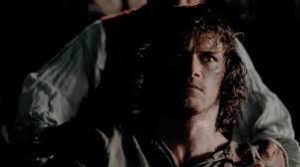 Poor Jamie. Bad enough that he got repeatedly raped in Wentworth Prison, and then had his wife go all General Patton on him while attempting to “save his soul.” Now he has to re-live his experiences whenever he wants to make love to his wife.

Starz’s Outlander may be different from the book in that the Starz writers had more accurate information available to them, information about male sexual assault and the male body’s involulntary ejaculation to pressure on the prostate. Alas, Starz has once again failed male rape victims who might be viewers — and their female partners — by presenting the assault as “love-making”, even if Jamie is mistakenly viewing it that way. 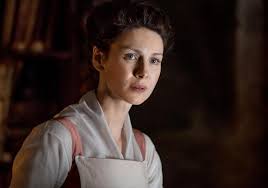 Though she and her husband Jamie are in Paris attempting to abort the Scottish rebellion at Culloden which will result in the destruction of the Highland Clan way of life, Claire doesn’t seem to have “any meaning” in her life. She feels bored and useless as Jamie runs from brothel to chess games to…

Does the man ever go to work at the job — in his cousin’s wine business — which supposedly supports this lavish lifestyle?

In any event, despite Jamie’s protests about Claire’s never being home when he needs her, she goes to work in a poor hospital, helping a nun with a dog do some really gag-me-with-a-spoon-gross-me-out stuff. Claire’s tasting the urine of a patient to determine whether he had sugar disease (diabetes) wasn’t the most repulsive scene of the episode, but it was close. 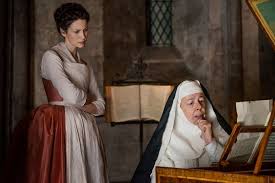 Later, after some cutesey jokes about what a “minor composer” Johann Sebastien Bach was going to be, the Mother Superior plays a piece of music in a letter which Jamie’s pickpocket has lifted. 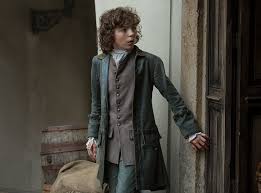 Then Jamie and cousin Murtagh (Duncan Lacroix) and Claire figure out that the “key is the key” to the code in the message. It was a silly scene, dragged out beyond belief, perhaps in an attempt to add humor, since virtually every time Claire said something, Murtagh didn’t understand her. 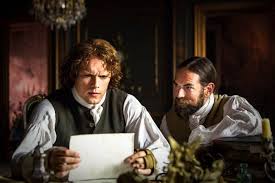 The only problem with the music-decoding scene is that most viewers couldn’t figure out what the key was either. Only that it had to do with music. And that Jamie and Claire miraculously figure it out.

Beats me how they did it. 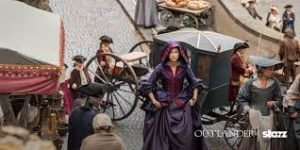 Alas, episode 4 continues the Bond, James Bond escapades of the married pair. This time, they plan an elaborate dinner for the Duke of Sandringham, whom they believe is the author of the musically-coded note.

At least, I think they think he’s the author.

I got a bit confused.

In any event, Jamie and Claire plan to trap Sandringham by also inviting Bonnie Prince Charlie to the dinner. Then, for some reason, Claire decides, on the day of the elaborate banquet, that she has to go to the hospital. She claims that her servant won’t allow her in her own kitchen.

But if it’s Claire’s kitchen… 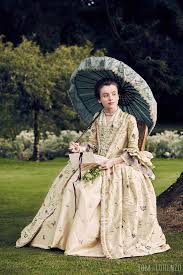 Claire takes English Mary with her to the hospital, though for the life of me, I could not figure out why. I guess she thought English Mary — who is supposedly an ancestor of Frank’s and who is in love with Alex Randall, brother of Black Jack — was also bored or something.

On the way home from the hospital, the carriage breaks down, and in her hurry to get home in time for the banquet, Claire and Mary walk.

Sure, they’re followed by Murtagh, but anyone could have figured out that it was a bad move.

And sure enough, it turns to tragedy when Claire and Mary are set upon by well-dressed “brigands,” who rape Mary in a graphic and violent scene. 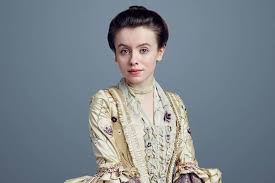 Does this mean that Mary, who eventually marries Alex Randall, as far as I can determine, will already be pregnant and thus will have a child that will only nominally be the ancestor of Frank Randall?

Not only do I not know, I simply do not care. 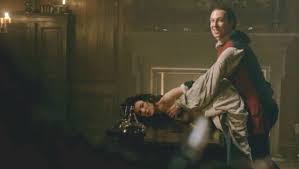 What is it with Diana Gabaldon and graphic rapes?

What is it with Herself and sexual violence?

In book one, which I read after I had seen all of season 1 of Starz Outlander, none of the sex scenes are even hinted at: all of them are left entirely to the readers’ imagination.

Except for the two rapes.

One is between Jamie and Claire, who continues to have intercourse with her despite her verbal objections, her physical resistance, and her fighting him, simply because she is his wife. (Chapter 23)

The other, far more violent and graphic, takes place between Jamie and Black Jack Randall in Wentworth Prison. It is related to Claire by Jamie after he is rescued.

Now, in season 2 episode 4 of the show Outlander, which may differ from the books, English Mary, who was a virgin, is graphically raped.

It was impossible for me to watch in its entirety, so I admit I missed the part of the episode where the “brigands” attempted to rape a very pregnant Claire, then stopped, apparently exclaiming that she was La Dame Blanche (according to other reviews of the show).

Afterward, however, I didn’t care about the dinner party, especially since poor Mary was lying, in shock and pain, upstairs in Claire and Jamie’s house, with Alex Randall attending her.  Confessing his love to the unconscious Mary.

Who cares if Charlie’s mistress Louise was pregnant with his child but had convinced her husband to accept it as his, claiming he’d been too drunk to recall intercourse with her? 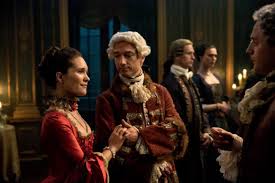 Who cares if Claire was wearing a duller than dull gown and a rock-necklace to her own banquet, 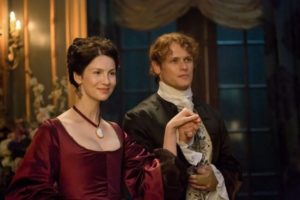 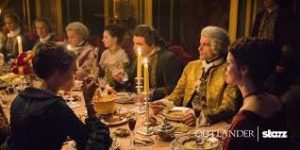 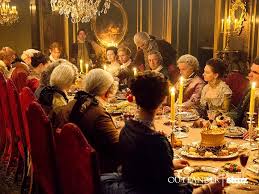 I disliked the two protagonists so much by that time that I decided it was pointless to watch any more episodes of Starz’s Outlander.

I mean, if you don’t like the show’s two protagonists, and the third one is a despicable rapist, what’s the point of the show?

I don’t see anything like the image presented in the cover of the Entertainment Weekly (above, at start of post).

I don’t see much love and affection between Jamie and Claire. Instead, they’ve reverted, mostly, to the bickering that characterized their relationship in the second part of season one. 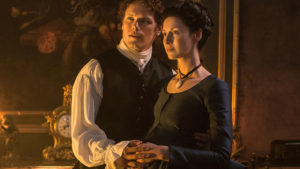 It’s time for me to say Farewell, Scottish Laddie, and Farewell, English Claire.

There are too many other interesting shows for me to watch to wade through multiple episodes of Outlander, trying to follow the serpentine and mostly absent storyline, only to be presented with yet another graphic rape, and with protagonists who are becoming increasingly unsympathetic.

I’m sorry for Cait and Sam, who probably believed these were their break-out roles.

I’m sorry for the book fans who don’t think the Starz show lives up to their expectations.

But mostly, I’m sorry for any writers, book or show, who think that constantly presenting sexual violence and graphic rape scenes, involving both sexes, is good writing or good fiction.

I’m more sorry for those books’ readers, though.

Through a Glass Dark and Dull:
Outlander season 2 Premiere

Outlander, the Show:
My Blogs from Season One