His real name was Daniel David Davison III, but nobody called him that except Sister St. James and the principal every time he got sent to her office for disrupting class. He used to make fun of his own name all the time, saying, “3-D. I’m 3-D,” erupting into uncontrollable laughter. Since we were only third-graders, we didn’t get the joke at all, and he didn’t like to be called Daniel David Davison III, so we called him “Glue-Boy.”

First graders had to use paste spooned out of a communal tub. Second graders were allowed to have individual containers of paste that had to be stored on the shelves when not in use. As third graders, however, grown-ups that we were, we got to have our very own bottles of Elmer’s glue, which we were allowed to keep in our desks, and Daniel David Davison III could do amazing things with Elmer’s glue.

All day, every day, he’d paint elaborate glue-tattoos on the back of his hands and forearms. The glue was his paint, starkly white against the perpetually darker canvas of his skin. He created dragons and gargoyles, knights and castles, vampires and werewolves from his fingers to the edge of his stiffly ironed, short-sleeved white shirt. I sat beside him, in the last seat of the third row, and every day, he hunched over his bare desk, concentrating so hard on his fantastic designs that the tip of his tongue stuck out while the rest of us watched in silent admiration.

Sister St. James would be writing our lessons on the board or gazing out the windows at the river on the far side of the church next door, or sitting at her desk with her eyes closed while we did our reading assignments, and Glue-Boy would be covering all the bare skin on both his arms with swords and sorcerers, dinosaurs and treasures, pirates with ships flying flags with skull-and-crossbones. After he finished, he’d put the bottle of Elmer’s down on his desk, hold his arms out in front of him till all the glue dried, then turn and show us his creations.

Any time that Sister turned around from the board or her reverie at the windows, or woke from her afternoon nap and saw us all watching him instead of doing our work, she’d rush back to him, her ruler slashing the air. Glue-Boy protected his creations by bending forward over his desk, stretching his glue-covered arms beneath as Sister beat him mercilessly with the ruler. Then she’d march back up to the front of the room, collapse in her chair, and order us to put our heads down on our desks as punishment. After a few minutes had passed, we’d surreptitiously look over at him, and he’d smile, his head and forearms held high, not a single one of his glue-paintings destroyed.

One day on the playground during recess, I complimented Glue-Boy on his art. He nodded without even looking up at me, so I feared I’d annoyed him. Occasionally after that, however, he would find me on the playground and show me his latest work. As the year progressed, the colors got brighter and the designs became more complex. I thought all of them were beautiful, even if I didn’t know what they were.

Even when he started using paint instead of glue, covering his face and arms with gorgeous colors, he never lost the name “Glue-Boy.” Though Sister St. James ordered him to the Principal’s office every single time he came in with his face painted, though the Principal called his parents and demanded that all his paints be confiscated, though his desk in the classroom was finally isolated in the corner so that no one could be close to him, nothing stopped him from painting. The morning he came in with his hair dyed a multitude of colors, we gathered around him in awe while all the teachers and the principal ranted and threatened.

He was our hero. 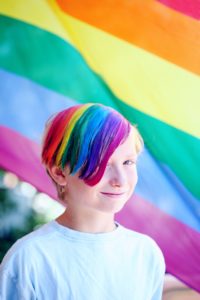 I suppose we all suspected that, eventually, his body would not be a large enough canvas, so when he pulled a box of colored chalk out of his coat pocket during recess and began decorating the playground itself, no one seemed too surprised. Even the teachers had long since stopped trying to control him: we heard that his parents had threatened to withdraw him from the school and send him somewhere more exclusive.

And the teachers didn’t try to make me skip rope or run relay races with the other girls: they accepted that it was my job to hold Glue-Boy’s colored chalks while he worked. By the time the Monsignor came over from the church to watch, everyone had accepted that this was just the way of the world: this was Glue-Boy’s purpose in life. The principal and the Monsignor stood by in silence, watching as the colored chalk covered the exterior walls of the elementary school, in ever more fantastic and elaborate designs, as high as Glue-Boy could reach. 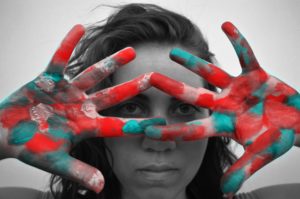 On the day I told Glue-Boy about my father and my divorced mother’s boyfriend, about what they did to me in the basement, in the garage, in my own bed late at night when my mother was asleep, Daniel David Davidson III offered to pour endless bottles of glue down their noses and mouths and throats and to keep pouring till the glue dried and hardened.

Glue-Boy was the first person who ever offered to protect me.

That made him my first love.