On Hairballs and the Writing Life 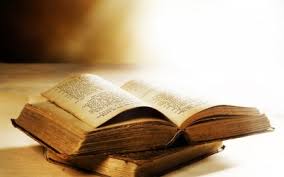 I meant to get a lot of writing done today. I hadn’t necessarily intended to do a blog, especially after I spent the entire morning doing the state taxes for our businesses (mine’s writing, of course), but I wanted to get some work done on that 15th Anniversary Edition of one of my books that I’m revising. Which was supposed to be published in December 2015.

Missed that deadline by being Mommy to a doggie that had to get an emergency tooth extraction, to one of our kitties who was diagnosed with uncontrolled diabetes and who had to be hospitalized (who’s now in remission), to another kittie who has FORLS — a dental disease found in 20% of Rescue cats which causes their teeth to break and expose the root — requiring two emergency tooth extractions, and to another kittie who has Stomatitis, an auto-immune disease in which the cat is allergic to the natural bacteria on its own teeth, causing its tongue, gums, palate, and throat to get inflamed and swollen, leaving the cat in great pain and unable to eat or drink. The only possible cure: complete extraction of all her teeth. But she still occasionally gets lesions on her lips, allergic lesions, which cause her great pain and prevent her from eating. So she has to get NSAIDs every third day, and get blood work every three months to make sure her kidneys are functioning properly.

As if that weren’t enough to keep Mommy from having any writing time over the last few months, the dreaded HAIRBALL Season has begun. 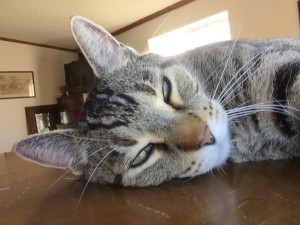 If you have cats, you know what I’m talking about. That horrid time of year when the weather begins to warm and cats’ hair begins to shed. Only it usually ends up in their mouths and digestive tracts from grooming before it gets a chance to be swept up by your vacuum. Last week, it was 50-60F every day. Shed-city.

And before we knew what was happening, Hairball Disaster Zone. 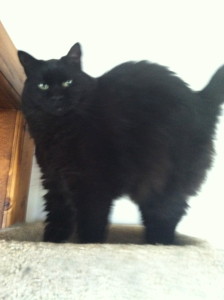 Sascha is leading in this race to cover the house with slimy, disgusting, smelly hairballs. She’s hurled 7 of them just in the past few days, 4 of them this morning and this afternoon. None of them has been less than 5 inches long, and each is as wet as a dripping beach towel. I’m thinking of giving up washing the blanket I put on the couch to protect it. Water is a more precious commodity in the desert than a couch, even if it does get stained. Meanwhile, Sascha, who doesn’t think much of the hairball gel, is giving me the Evil Eye and the Arched Back from the top of the highest Cat Tree in the house. 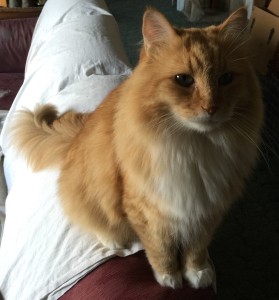 Eli’s become a real pro at this Hairball Game. He can drag out a Hairball, leaving little gnarly puddles of food and… well… imagine it… all around the room in a circle before he finally coughs up one humongous hairball. His must be at least 6 inches long and 3 inches in diameter. It wouldn’t be so bad if he did it all in one place, like Sascha, but he prefers to try to cover as much ground as possible while discharging the hairball and all its accompanying contents. He’s only done 3 today, but when you have to clean the entire carpet in the room each time he hurls one, it makes it seem like so much more. 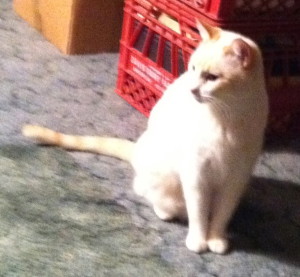 Ling seems to be annoyed that the LongHairs are getting all the attention, so she dropped 3 in an hour today. And even though she likes the taste of the hairball gel, she made us chase her for half an hour before letting us get some into her. Then she stalked away and promptly ejected another gnarly mess. 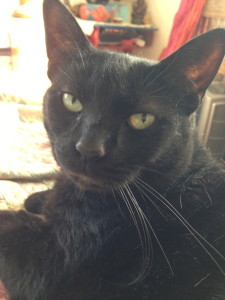 Trixie just gave us the Evil Eye To The Max when we tried to approach her with the tube of hairball gel: I believe she feels she has “done her time” — for life — after being subjected to Blood Glucose tests, which require ear-pricking, and insulin shots for the past 2.5 months. Don’t tell her she might come out of remission: she might run away and join the circus. 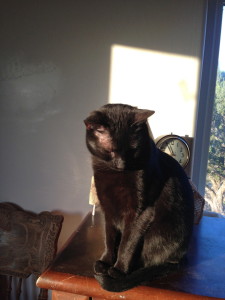 Sophie is totally simpatico with Trixie on the hairball thing, even if she does like the taste of the gel if she’s in the mood. Neither of them were in the mood today. And both of them like to expel their hairballs on the top of things like my computer keyboard, my desk, the book I’m currently reading, my iPad (cover closed, thank god). 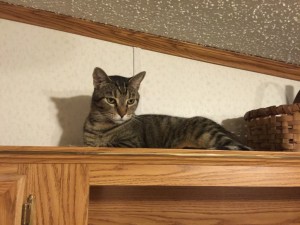 Baxter likes the gel, but not all the commotion. After depositing his slippery hairball gifts on the kitchen chairs today, he jumped up onto the top of the cupboards. I guess he thought it might be fun to see us climbing on chairs and ladders to try to catch him. We eventually surrendered to his High Ground, though I’m sure there’s a pile of hairballs up there by now. 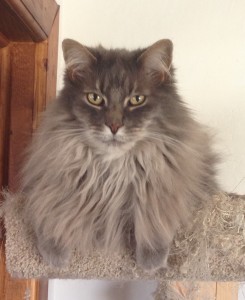 Shooter Tov — THE Alpha male in this household — not to be outdone by his little brother Baxter, who sometimes gets the privilege of playing Alpha Male if Shooter’s taking a nap, watched Baxter cover the cushions on the kitchen chairs, watched Mommy and Daddy sponge-sponge-sponge-ing them off, and then climbed onto the kitchen table and decorated it with a hairball that would rival any canvas of Jackson Pollock’s.

The only person who has NOT expelled a hairball today is Sadie-Doggie, but she’s been following the cats around as they do them because she loves the hairball gel and insists on getting some each time one of them does. Mommy’s trying to write and Sadie’s begging for more gel. I can just hear her asking, What does a dog have to do to get some yummy-yum-yum hairball gel around here? Cough up a hairball?

And I’ve just been told that Shooter is attempting to deposit a slimy gift in my bag, which I accidentally left sitting on the kitchen chair while I went to clean up Sascha’s latest offering. 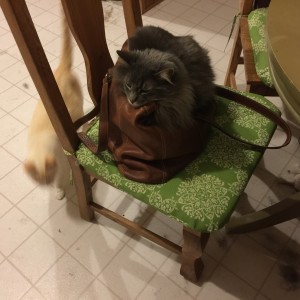 Ahh, the life of a Mommy.

I had to write this blog today to remind myself that I am actually also a writer.

Filed under Cats, Humor, Philosophy, Real Life of a Writer

4 Responses to On Hairballs and the Writing Life