PENNY DREADFUL: Be Not Afeard

Be not afeard.
The isle is full of noises.
Caliban (the monster)
The Tempest 3.2.148
William Shakespeare 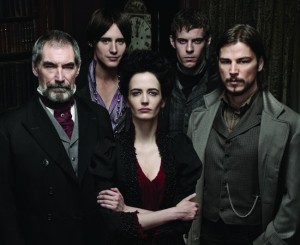 Showtime’s new series Penny Dreadful has its origins in literature of the late 19th century, a time when men of all kinds were questioning the relationship of the supernatural to man, of God to man, and what was on the other side. Named after the contemporaneous tabloids, the Penny Dreadfuls, which listed all the gruesome details of crimes and atrocities, including those of Jack the Ripper, the show’s atmosphere is haunting and spooky.

Most of its characters seem to inhabit “The Demi-monde”: a half world of shadows and light. It is there that Sir Malcolm Murray (Timothy Dalton), with the help of his daughter’s childhood friend Vanessa Ives (Eva Green) and an American gun-for-hire Ethan Chandler (Josh Harnett) search for Murray’s missing daughter Mina. In their search, they also encounter Victor Frankenstein, Dorian Gray, and other fictional characters. Despite its flaws so far, the show is fascinating. Penny Dreadful was created and is mostly written by John Logan, who, in the clip below, explains the literary origins of Penny Dreadful.

Despite the trailers, I found the first show a little slow, as did other viewers and reviewers. Till the end. So I watched the second. Then the third. The show does have some weaknesses, the most distracting of which is its disconnected storylines. I still haven’t figured out how Dr. Frankenstein is involved, though he was introduced in the first episode. His role in the “Searching for Mina” story seems mostly like a satellite, and his own story of his Creature, has been, at least temporarily, discarded.

How Dorian Gray fits in, I have no idea, I confess. And except for the fact that he has sex with a lot of people, I haven’t seen anything he’s done that he needs to hide. Unless he’s committing crimes we don’t know about. That’s the whole premise of Oscar Wilde’s The Picture of Dorian Gray: that the portrait becomes as gruesome and ugly on the outside as Dorian himself is morally, while he remains physically beautiful. (I had to explain that to my boyfriend, who kept asking where Jekyll and Hyde were, and didn’t know anything about Dorian Gray). Penny Dreadful Right Behind You Trailer.

4. The most quirky flaw I’ve noticed so far is that every episode ends with a punch, a shock, an unexpected surprise. Now that could be considered a good thing, although it could end up making each episode seem like something from The Twilight Zone, where viewers just wait for the ending to get their fix, and make more sense of the story so far.

5. The most serious flaw in Penny Dreadful to date is that the story of Sir Malcolm Murray, his protegée Vanessa Ives, and their search for Sir Malcolm’s missing daughter Mina, who has been taken by Dracula (unnamed as yet) keeps getting interrupted by the vague appearances of Dorian Gray, Victor Frankenstein, and, frankly, Ethan Chandler, despite this final character’s being hired by Vanessa Ives to help in the search for Mina.

Still, the show is very intriguing. It has a lot of strengths.

7. Finally, the greatest strength in Penny Dreadful is its writing. The audience is not treated like a bunch of buffoons who have to be hit over the head with every piece of symbolism that appears. The plot is often moved forward by what the characters don’t (or won’t) reveal rather than by what they reveal. The characters are interesting and the actors have good lines to say: that comes from the writer(s). Based on that alone, I’m going to keep watching. Penny Dreadful: Behold Terrible Wonders Trailer.

In fact, I’m starting to look forward to Penny Dreadful, which means the show seems to have found its stride and is firmly centering itself, letting the strengths outweigh the minor weaknesses. Metro Entertainment’s blog called Penny Dreadful “elegantly scripted, with a dangerously handsome cast, enchanting cinematography, and an enigmatic storyline.” While I don’t agree with everything Metro Entertainment said about the show, I agree with most of its points.

If you haven’t had a chance to watch Penny Dreadful yet, you can watch Episode 1 free on its homepage on Showtime. You can catch up with the remaining episodes on ShowtimeAnytime. Then, at 10 p.m. ET on Sunday, you’ll be ready to join the rest of us #Dreadfuls (from Twitter) and buzz about the show.

If you want to read the books that the literary characters are based on, Showtime is offering them for sale on its site, but you can get them free as ebooks: Bram Stoker’s Dracula, Oscar Wilde’s The Picture of Dorian Gray, and Mary Wollstonecraft Shelley’s Frankenstein. And I’ve thrown in Robert Louis Stevenson’s  The Strange Case of Dr. Jekyll and Mr. Hyde simply because no exploration of that period would be complete without it, and I can’t believe he won’t show up, eventually, in Penny Dreadful.

So Many Monsters: The Penny Dreadful Finale