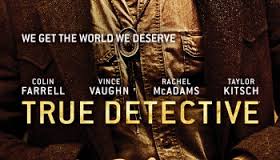 God, I was excited when I heard that Colin Farrell was going to be in HBO’s critically acclaimed and popular anthologized series True Detective, Season 2. I was impressed that a female was going to play one of the law enforcement officers, even though the actress who was cast is awfully young to have made detective rank in such a male-dominated profession. I was a bit leery about Vince Vaughn playing the professional criminal-mobster, since he mostly does comedies, and the few dramas he’s been in have been mediocre at best.

But I adored True Detective Season 1 and thought that, despite the serious plot holes and pretentious, obscure allusions last year, Matthew McConaughey and Woody Harrelson did a brilliant job as Detectives Hart and Cole, respectively, in an intriguing detective story. 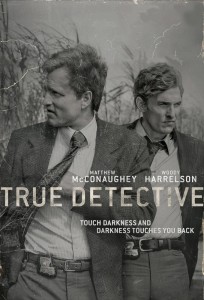 I hoped the creator-writer, Nic Pizzolatto, could, at the very least, do as well with the story and characters this season. I prayed that he would learn from his mistakes last season — pointed out repeatedly by viewers, critics, fans, and reviewers throughout the season, but especially after the finale — and would strive to become a better writer.

Alack and alas, that does not seem to be the case.

Instead of learning from the valid criticisms and critiques of True Detective Season 1’s articulate viewers, instead of addressing the story-telling problems which left serious plot holes in the premiere season, instead of respecting his intelligent viewing audience, writer-creator Pizzolatto seems instead to be trying to insult the show’s fan-base by mocking viewers (more mutilated  & nude Barbie dolls, endless whores, beaucoup misogyny, and a “Violet-veiled Skeleton King” prominently standing in for last year’s Yellow King).

Huffington Post’s entertainment editor Matthew Jacobs wrote that “episode 2 was only marginally better than episode 1,” which was a “Snooze,” while his fellow HP entertainment editor Erin Whitney wrote, “Pizzolatto has somehow lost all sense of subtlety in his writing to the point that I can’t help but wonder if he’s playing a joke on us.”

The mockery’s directed at all of us viewers who were intelligent enough to see the plot holes, and articulate enough to refute Pizzolatto’s bizarre or lame “explanations” for them.

In any event, the momentum of the show has been completely changed.

Instead of a fast-paced, psychologically intense, visually memorable series of murders and missing persons investigations headed by two diametrically opposed detectives, each with his own conflicted philosophical and moral strengths and weaknesses, this season’s first two episodes have been filled with endlessly dull backstory for each of the major characters.

And there are too many of those to keep track of.

The Cast of Characters 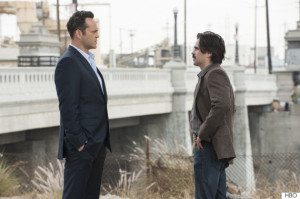 The cast of characters is so large that it’s impossible to understand who everyone is, how they’re related to this season’s crime(s), and what, exactly, the storyline is. Colin Farrell (above R) plays an alcoholic and drug-addicted city of Vinci detective, who is on the payroll of gangster/mobster Frank (Vince Vaughn, above L) because long ago, Ray’s wife was raped and brutally beaten, and Gangster Frank gave then-Sheriff Ray the identity of the perpetrator.

I’m okay with that so far. I was also fine with the symbolism of the song “My Least Favorite Life” being played at a bar while the two exchanged “dirty” money. It worked. And I didn’t find the song “depressing” as some reviewers did. I actually kind of liked it.

But these two fellows aren’t the only major players in the series this year. 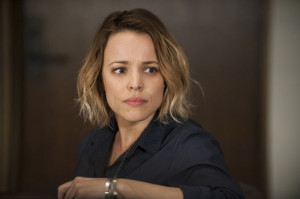 Rachel McAdams  plays Ani (short for Antigone, apparently), a County Sheriff, who has a troubled relationship with her sister, and with her “new age” faux Buddhist father (played by David Morse, below L), who runs an institute with an unpronounceable name. She also wants some sex act so weird or perverted that her boyfriend goes limp and, despite his apologies, she storms off. 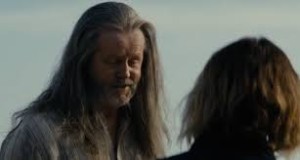 (There are already people Googling the Institute’s name, as well as the story of Antigone, a Greek tragic figure, and trying to figure out the “Puzzle” for this season. If there’s a puzzle, viewers better be able to figure it out without external resources, or the show’s poorly written.)

We’re still not done with the law enforcement officers. 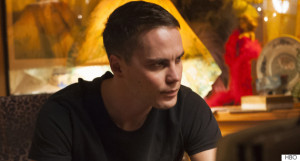 Taylor Kitsch plays Paul, a war veteran or civilian involved in Black Mountain, who is now a California Highway Patrol Officer, suspended with pay after he stops a famous actress for speeding recklessly into traffic and does not accept her offer of sex in return for dropping the ticket. He’s seriously psychologically scarred, it seems, and his body is physically scarred.

I really hate it when films (e.g., Platoon) and shows hammer viewers over the head with symbolism. Every viewer would have gotten that Paul is extremely emotionally and psychologically scarred from his virtually incoherent, mumbling interactions with his girlfriend. We didn’t need the physical scars to “prove” it to us. 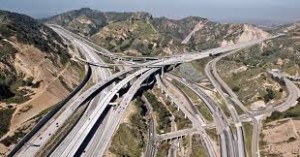 Too many of them.

Way too many of them.

And, in case Pizzolatto didn’t know this, California just doesn’t have the brooding atmosphere and ominous threat of the isolated and rural Louisiana bayous of season 1. 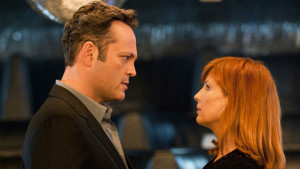 Backstory (also called exposition), which has no forward momentum, is a very tedious and ineffective way to develop characters. It’s in the past already. Instead, hints about their pasts — woven into the present story — work better. Not long scenes from every single character, one right after the other. Not long monologues in bed with the wife (Gangster Frank with his wife, played by Kelly Reilly, above), not faux interviews by custody lawyers against a backdrop similar to last season’s (Ray in the opening scene of the season). 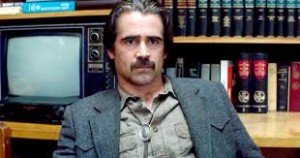 99% of the show so far this season has been backstory. 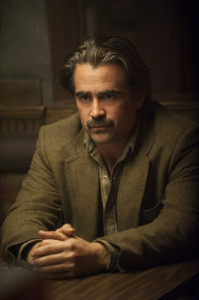 Episode 1: “The Western Book of the Dead.”

Some city manager named Casper, who’s involved in some kind of shady land deal, didn’t show at a big gig thrown by gangster Frank, which made him cuss and throw a glass. CHiP Paul, after a blow-job and a fight with his girlfriend, was riding real fast on his motorcycle in the dark, and he found Casper’s body, seated in rigor, at a picnic table in the County where Detective Ani works. But Casper is a “missing person” from the city of Vinci, where Frank works.

Pizzolatto decided that all three of the law officers, though from wildly different jurisdictions, have to work together to solve the murder.

Even though the CHiP’s not a detective.

At the end of last night’s episode, after more backstory was concluded, in a True-Psycho moment, Ray (Colin Farrell) got shot — twice — at close range, with a shotgun, by somebody in a full-feather-and-beak crow head. 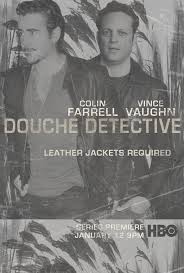 The memes are already out (above), and this is one of the nicer ones.

But maybe you should look at the official HBO trailer yourself and decide if you want to jump in for episode 3.

It’s not like you missed anything important so far.