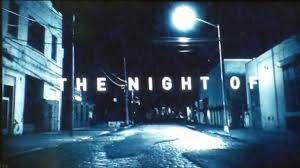 HBO’s limited, eight-part miniseries The Night Of, based on the BBC crime series Criminal Justice, premiered last night and gave viewers a stunning glimpse into the current state of criminal justice, at least as it’s supposedly occurring in New York City. Creators Steven Zaillian and Richard Price give us the story of a fictitious murder case, complete with police investigation and legal proceedings. The premiere episode, “The Beach,” was gripping and nerve-racking. If the series continues in this intense vein, it’ll be a crime drama worth watching. 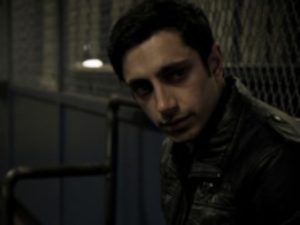 In “The Beach,” we’re introduced to a young Pakistani-American college student and tutor, Nasir Khan (Riz Ahmed), “Naz,” for short, who unexpectedly gets invited to a basketball players’ party in uptown Manhattan. In his excited determination to meet the “kind of girls” who’ll be at such an elite party, Naz takes his father’s cab without permission after Naz’s friend cannot give him a ride.

Of course, since it’s his father’s cab, Naz doesn’t know how to turn on the Off Duty lights, so he gets unwanted passengers. He needs the police to help him get two men out of the back of the cab, giving the police a chance to call him “Captain Bubba,” which sounded like a racial slur since his father had affectionately called him “Bubba” during dinner, while imprinting Naz’s face in the police officers’ memory. So Naz is just about to return to looking for the party, after the officers give him directions, when a pretty Caucasian girl, Andrea Cornish (Sofia Black-D’Elia) gets into the back of his cab. 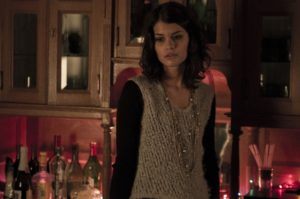 Like any red-blooded college-age male, Naz immediately decides that he can take his passenger anywhere she’d like, even though she says she wants to go to “the beach.” Eventually, he tells her he can do the river, and takes her uptown — “way uptown” she insists — where they sit on the bank, admire the lights, and she offers him drugs. He refuses at first, but after she takes one of the pills and says she “can’t be alone tonight,” Naz also takes one of the unknown pills.

I found it a bit crazy that a young man who is obviously a good enough mathematics student to tutor basketball players at the college would be foolish enough to take unknown drugs from a girl he’s just met, and whose name he doesn’t even know, but maybe I’m being  too wary, given my own experience with sexual violence. In any event, Naz goes to her home, an extremely expensive Brownstone that she says she owns.

Outside, two African-American males pass the couple as they’re going to the Brownstone, and one of them makes a racially derogatory comment to Naz. After he asks the man what he said, it’s repeated, and it’s something like, “Did you leave your bomb stuff at home, Mustafa?” Naz is clearly upset by the remark, as well as astonished, but given the fact that the story takes place in New York City in Oct 2014, post-9/11, viewers would have found it unrealistic if one of the African-American men had not made a racial slur in passing a young man of Arab/Muslim ethnicity.

After Naz and the young girl go into her place, she gets out tequila and a knife for limes. After a shot, she uses the knife for the stab-the-table-while-missing-your-fingers-and-hand game, and convinces Naz to do the same. Then she tries to get him to play the knife game with her hand. The warning lights were flashing, but Naz was too besotted to see them.

When he stabs the knife at the table between her fingers, he hits her hand. Her blood is on the knife with his fingerprints. When she puts her bloody hand on his face and neck as she kisses him, the blood gets all over his face and neck, presumably on his clothes as well. Naz is certainly headed for doom now.

After engaging in sex with the young lady, Naz wakes up in the kitchen, in front of the open fridge, and returns to the upstairs bedroom, dressing in the dark, and telling the girl that he has to get home. In a very effective scene, Naz turns on the light, then turns it immediately off, with a horrified look on his face. When he turns on the light again a few seconds later, the camera pans over the bloodied and obviously dead boy of the girl, in a blood-soaked bed.

Naz runs. Unfortunately, he runs without his jacket which has the cab keys. To get back into the Brownstone, he is forced to break a pane of glass, which alerts a neighbor across the street, who looks out his window, becoming yet another witness in Naz’s dangerous and somewhat naïve, self-destructive odyssey.

Naz makes the ludicrous choice of taking the knife with him when he retrieves his jacket and cab keys. This was perhaps the only truly ridiculous part of the plot. Why on earth would this young man take the knife when frantically running from the home of a dead girl with whom he’s just had sex? It made no sense to me. Especially since Naz hid the bloody knife, which was on the dashboard of the cab, from a motorcyclist who pulled up beside him at a light. 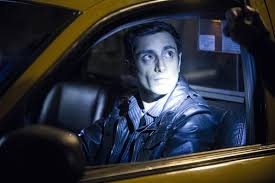 After turning left on a street where no left turns were permitted, Naz is pulled over by two police officers, who want to test him for drunk driving. While they are interrogating him, somewhere around 65th street, they receive a call about a break-in on 87th. For some bizarre and completely unbelievable reason, they pile Naz into the back of their cruiser and take him with them to the suspected break-in location.

Wha?!?! There are only two police officers in all of New York City? These two, who have to take a drunk-driving suspect with them to a potential crime scene? This made no sense whatsoever, but I was already so involved in Naz’s story that I kept watching, just voicing my objections about the improbability of that action aloud.

That’s the time the story delved into the criminal justice part of the miniseries. Cops came to the girl’s Brownstone while Naz was sitting in the back of the cruiser. Despite the female officer’s continually asking to be relieved of duty since her shift (and her partner’s) had ended, other officers kept insisting that the two stay since they were first on the scene. Eventually, the two initial officers, who had Naz in the backseat of their cruiser, were instructed to send him to the station in another cruiser. Those officers take him in without knowing why he’s even in their vehicle. More warning lights exploding for Naz, though, at this point in the story, he’s in too deep to get out safely.

At the police station, which was basically deserted — causing me to wonder exactly what precinct in New York City the station was located in, that it had virtually no prisoners and very few officers on duty at night — Naz is mostly forgotten. In fact, at one point, he attempts to leave, but is prevented from doing so by the entrance of the chief detective who was called to the crime scene, Detective Sergeant Dennis Box (Bill Camp). 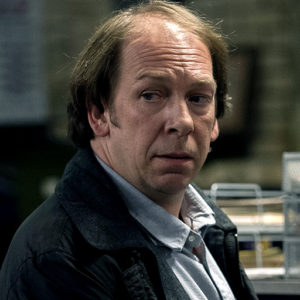 Once Detective Box is on the scene, things get scary-serious. Outside the Brownstone, he interviews the young black man who initially made the “Mustafa” remark, and who tells the Detective that the girl was with an “Arab.” When the Det. Box tries to get the witness to be more specific, he says Naz was like “one of those deli guys.” The detective is not impressed, and threatens the young black man in order to get him to come to the police station to identify Naz.

At the station, where Naz has been ignored, the original officers are annoyed that Naz was not given a sobriety test. Several hours later, it is now too late to test his blood alcohol. While the officers are patting down Naz, getting his ID and filling out their report, the neighbor who saw Naz at the scene of the break-in is being interviewed by Det. Box, telling Box that the suspect didn’t “hail a cab,” as the detective said, but that the suspect “got into a cab, his own cab,” which causes the female officer who is patting down Naz to pause, just moments before finding the knife in Naz’s jacket.

Once the knife is found, Naz is subjected to Come-on-buddy-you-can-trust-me-tell-me-the-whole-story-help-me-understand-what-happened interrogations by Box, who clearly thinks the young man is guilty of killing the girl. He is manhandled and verbally abused by unsympathetic officers, forced to strip so that his clothes can be collected as evidence, and photographed nude. 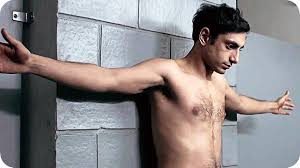 When Naz says he wants a lawyer, the Crime Scene Investigation officers tell him they don’t know anything about that: he should talk to Detective Box. That made me wince for poor Naz. Not that I think he’s been the brightest boy so far, but it was still cringe-worthy to have his request for an attorney — as he’s being fingerprinted — so casually, and probably illegally, disregarded by police officers, no matter their speciality area of investigation. At this point, I didn’t even think that Naz had been read his rights, though later, with the lawyer, Naz insisted that he had been apprised of his legal rights. 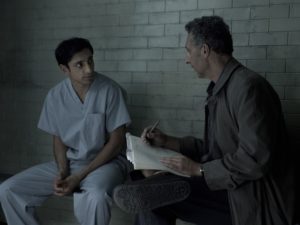 After Naz is left alone in a cell, an attorney seeing another client sees him. Leaving the building, attorney Stone (John Turturro, above R) asks an officer/detective, “What’s up with Gunga Din?” and he’s told the boy cut a girl. With that racial slur basically ignored by the detective, and with limited information about the potential client, Stone returns to the station and claims that he’s Naz’s lawyer. Stone meets Naz, telling him he’s his attorney now, and attempting to determine if any laws have been broken. It is then that we learn that Naz has been read his rights, after the lawyer says, “Please tell me they didn’t read you your rights.” Still, though it’s not going to be a slam-dunk, as the lawyer apparently believes, he’s going to represent Naz, though Stone still apparently thinks Naz has only “cut a girl.”

When Stone goes to the duty officer and attempts to get Naz released, Stone learns, to his obvious horror and dismay, that Naz is being held for murder, not merely for “cutting a girl.” Viewers learn virtually everything they need to know about Stone from the look on his face as he turns and stares at Naz in the holding pen. Stone is obviously an “easy-case-only” attorney, used to helping people who are picked up regularly (as in the transvestite Pauline, whom he was originally at the station to see). It’s not clear whether Stone is a seasoned criminal or trial attorney, but I’m guessing that he is not. Unfortunately for Naz, who is finally permitted to phone his parents and tell them that he’s been arrested for murder, Stone is the attorney of record, despite the horrified look on the attorney’s face when he realized that Naz’s crime was more than assault.

It looks like both Naz and his attorney Stone are in for a rocky trip through the American justice system in HBO’s gripping crime drama The Night Of. The mini-series airs Sundays at 10p.m. ET. Viewers who are HBO subscribers can watch the premiere “The Beach” on HBOnow or HBOgo. Other viewers can see the tease or the official HBO trailer for The Night Of miniseries.

The gap left by the season finale of Game of Thrones has just been filled by the gripping crime drama set in contemporary New York City, The Night Of.

Hold on to your summer hats, my Lovelies, and pray for Naz.