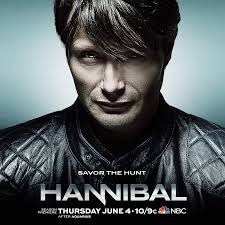 If you’ve read my previous blogs on NBC’s amazing and daring series Hannibal, you know I was catching up on Seasons 1 & 2, and so intentionally did not reveal any spoilers or important plot lines in case there were other viewers like me who had never seen the show. (For one thing, I’m rarely awake @ 10p.m., being an early riser, and for another, the local network here delays Hannibal by an additional hour beyond the 2-hour time-zone difference, but that’s another source of irritation and rudeness that I’ll have to address with them.) From now on, my Hannibal blogs will include some spoilers, but they are not merely plot summaries. That’s not my style. 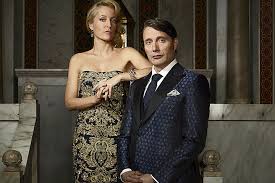 That being said, I have to say Bravo! to the writers of the Premiere episode of S3: “Antipasto,” and not just for going back to names of dishes that I can pronounce and understand as episode titles. The premiere of Season 3 was a bold and brilliant departure from the previous seasons’ premieres, as well as from the seasons themselves. It was symbolic of the manner in which Hannibal (Mads Mikkelsen, above) and his former psychiatrist, Bedelia du Maurier (Gillian Anderson), who are now posing as husband and wife in Paris and Florence, are attempting to re-invent themselves. 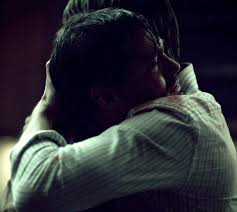 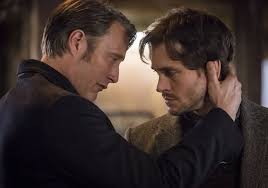 And by “caring for Will,” I mean as much as a serial killer can care for anyone other than himself, and only because Hannibal believed Will could become more like Hannibal himself.

Throughout the first two seasons, Hannibal has been drawn to patients who seem to have some criminal, especially murderous, leanings, and has pushed them to “see” and to “become” — a common theme in the Thomas Harris novels on which the show is based — and to honor their true natures. In fact, one of Hannibal’s lines in last season’s finale was, “Now that you know me, see me.” 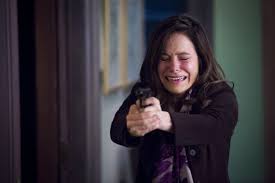 His warning to his lover Dr. Alana Bloom (Caroline Dhavernas) — that she had a choice to walk away, after she confronted him, weapon drawn, weeping at her own blindness and at his “betrayal” — surprised me. I thought he might find her pulling a gun on him “rude,” and we all know how Hannibal feels about rudeness. I wasn’t surprised that he’d emptied her gun while she slept in his bed beside him a few days earlier, or that he went after her when she pulled the trigger.

He had warned her, after all. 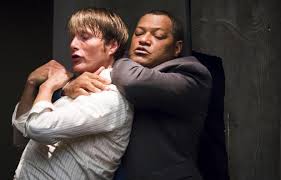 His confrontation with Jack Crawford (Laurence Fishburne, above R), who seems to believe that “might makes right,” was one of the saddest in terms of Jack’s inability to outmaneuver Hannibal psychologically or physically. It was also one of the most beautifully choreographed. 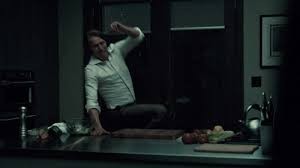 You could see Mads’ dancing background in virtually every move, but especially in his jump over the counter when he went after Jack (above). I don’t know if Mads was wearing a harness to help him leap over that counter, but even it he was, it was still a jeté magnifique. 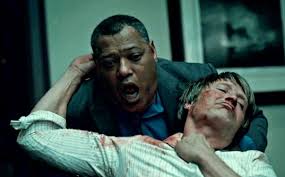 Despite Jack’s most valiant efforts to defend himself and take down Hannibal, however, Jack was simply no match for Hannibal’s physical agility and determination. Jack was left locked in the pantry, bleeding out, desperately trying to reach his dying wife on the phone to say good-bye. 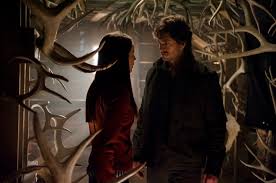 Most shocking in the S2 finale was the reappearance of Abigail (Kacey Rohl, above L, below R), whom both Will and Hannibal had begun to view as a “daughter-figure.” Will did so after he shot her father Garret Jacob Hobbs when the FBI, i.e., Will and Hannibal, were attempting to apprehend Hobbs for a string of murders. During that showdown, Hobbs had already killed his wife, pushed her, dying, out the front door, and was threatening to slice open his daughter’s throat. He did. Will shot him dead. Will became the “protective” father-figure. 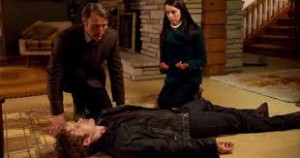 Hannibal became  a “father-figure” after he caught her killing the brother of one of her father’s victims. Hannibal realized then that Abigail had been a willing participant in her father’s killings of the girls — she was the bait — despite her protestations to the contrary. Hannibal realized her potential to “become,” and told her he could protect her, as long as she asked for his help. Hannibal became the “teaching” father-figure. 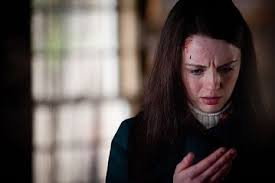 In S1, Abigail came to realize that Hannibal was a serial killer, and viewers were given the impression that Hannibal had killed her, however reluctantly it might have seemed at the moment he first tenderly touched her face after she had seen beyond his “person-suit.”

Hannibal framed Will for her murder by forcing Abigail’s ear through a feeding-tube into a relatively unconscious Will, who vomited it back up along with his medications. Although Will didn’t recall killing Abigail, he believed it might be possible since he could find no logical explanation for vomiting up her whole ear, un-chewed and without apparent bite-marks. (Viewers didn’t know how the ear had gotten into his stomach until the premiere of  S2, when Hannibal’s force-feeding was shown.) 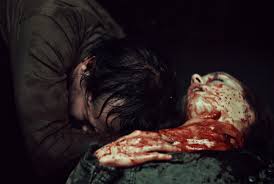 Abigail reappeared in the S2 finale, upstairs, with a crying, bewildered, and obviously disoriented Alana Bloom, and pushed her out a second-story window, leaving her broken on the stone doorstep below, in the pouring rain. She then went down to Hannibal, where he then proceeded to slice her throat open as her father had originally unsuccessfully did.

Will and Abigail lay side-by-side, both bleeding out, with Will vainly attempting to reach her and stop her bleeding as he had done so long ago in her father’s kitchen. 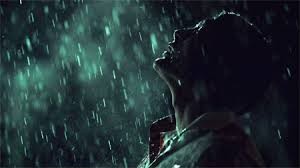 The final, pre-credit scene, showed Hannibal stepping out into the rain. In this metaphorical baptism, Hannibal is re-born.

Having finally been seen for exactly what he is, Hannibal can now become himself most fully. 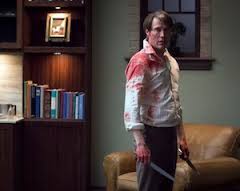 If you were foolish enough to turn off the S2 finale before all the credits rolled, then you missed the most startling moment of all: Hannibal, drinking champagne aboard a jet, with his companion, the lovely Dr. Bedelia du Maurier. 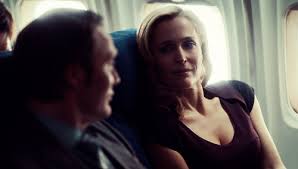 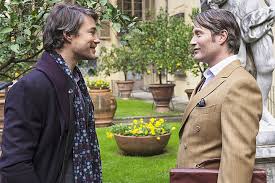 They later discuss a few things at a party, mainly some poet’s “bad writing,” before Hannibal leaves to follow an older gentleman at that party home, where he kills him and eats his liver, greeting the man’s wife-now-widow with a pleasant Bon soir when she enters the apartment. 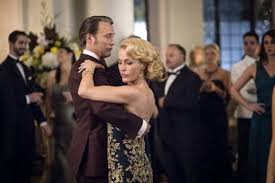 Later in the S3 premiere, no longer in Paris but in Florence, viewers learn that the beautiful Bedelia, played by Gillian Anderson, is living with Hannibal as man and wife. We are treated, too briefly, to a dancing scene, where Hannibal gives us a glimpse of a smile. When the dance ends, he gazes down at Bedelia and murmurs, “Bellisima,” to which she softly responds, “Grazie.”

I usually try not to talk about looks this way, but wtf kind of supergoats has Gillian Anderson sacrificed to the dark gods to look so good?

I think it’s the wardrobe change, or perhaps Bedelia’s bathing in Hannibal’s victims’ blood, but it may be Gillian’s physical proximity to Mads that has her glowing.) 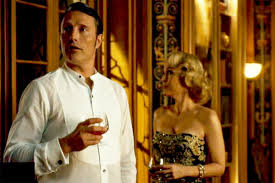 In any event, Hannibal wants to “preserve the kind of peace” he’s found in this new life, where he’s “hardly killed anybody.”

Yes, let it be a fairy tale, then…

Not That Kind of Party 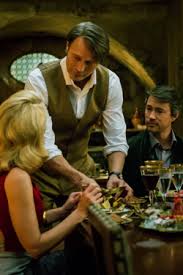 Between flashbacks containing Abel Gideon (Eddie Izzard) and Hannibal, as Hannibal is slowly chopping off bits of Gideon’s body and feeding them to him while they discuss the definition and morality of cannibalism, Hannibal is posing, in his new life in Florence, as Dr. Fell, whom he murdered to “vacate” the faculty position he held, making it available to himself. Bedelia is aware of this. She is posing as Mrs. Fells.

Alas, Dr. Fells’ former TA Dimmond appears in Florence, too, meets Hannibal again, who is now calling himself Dr. Fells instead of Boris Yakov. Dimmond’s no fool, or so it seems, and though he casually and repeatedly tells people that he knows Dr. Fells well, and hints at the “stories he could tell” were he not “such a good friend,” Hannibal invites him to dinner. 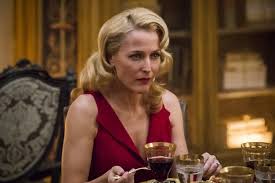 There, Dimmond comments on Bedelia’s diet, and the exchange which follows, involving what the Romans fed animals to ensure their unique taste, and ending with “It’s not that kind of party,” is too exquisite for me to ruin it for you here. You have to see it to catch all the nuances, the sexual innuendo, the chemistry between Bedelia and Hannibal (and between Gillian and Mads).

Quite the couple, they make.

Alas, all is not well in Bedelia-Land.

Though Hannibal claims to have found a sort of peace, Bedelia is clearly uneasy, anxious, and increasingly frightened. 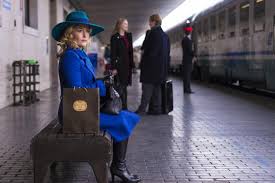 The scene of her waiting for the train — to what destination, we are not told, since she walked to the market — while gazing up at the surveillance cameras, serves as a metaphor for Bedelia’s life with Hannibal. She is more than uneasy, in fact: she is terrified because she is constantly being watched. 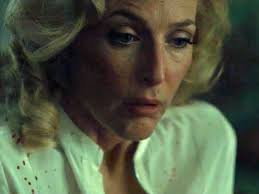 We also learn where Hannibal went immediately after the carnage in S2’s Finale — to Bedelia’s house. When she entered, she discovered him taking a shower in her master bath. He came out of the shower to find her sitting on the bed, with a loaded pistol in one hand, and a drink in the other. After asking if he could get dressed, he told her he’d taken off his person-suit.

She asked how that felt.

He told her she was in no position to ask such a question.

Now, in Florence, living with Hannibal as his wife, Bedelia’s trips to the market do nothing to quiet her. 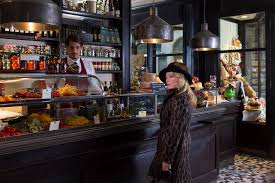 Her attendance at Hannibal-as-Dr.-Fells’ lecture on Dante is apparently required, because she is obviously uncomfortable, and she bolts as soon as she catches a glimpse of the former TA Dimmond, leaving Hannibal to gaze upon her empty chair. 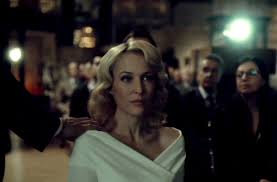 Scurrying home to their elegant Florentine apartment, she packs, and is just about out the door when Hannibal opens it, followed by the big-mouthed Dimmond, whom Hannibal must deal with. 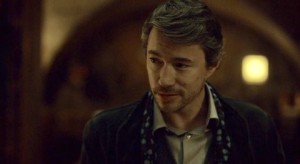 Hannibal’s and Bedelia’s ensuing conversation about “participation vs observation” open other, symbolic, doors: into how much Bedelia knows about Hannibal, how long she’s known it, and the secret Bedelia and Hannibal have never revealed about the time she was attacked by a former patient of Hannibal’s, who was killed, and Hannibal’s role in that.

It is this secret that has apparently bound Bedelia to Hannibal, even when she tried to “retire” from clinical psychiatry.

No other major characters appeared in the premiere, so their fates are as yet unknown. I have intentionally avoided viewing any Season 3 trailers which might reveal who survived and who didn’t, and I have not included them here.

Meanwhile, I say Bravisimo to Bryan Fuller and the others who have changed the entire approach to Hannibal.

Because, after all, now that he has been seen, he can become. 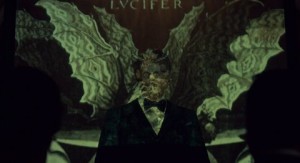 The Nightmare Under the Pillow: NBC’s Hannibal, the Series, Season 1

The Nightmare that Followed Him Out of his Dreams: NBC’s Hannibal, Season 2