Outlander, the Show: My Blogs from Season One 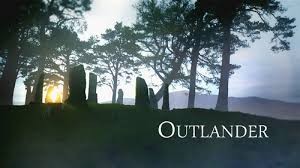 When I first saw the advertisements for Starz’s show Outlander, based on the bestselling books by Diana Gabaldon, I was intrigued enough to set the premiere date in my calendar. I’m not usually a fan of science fiction or fantasy — this show is categorized as both — but Outlander was also listed as a “romance.” That was an interesting combination. I gathered, from the commercials, that a woman fell through a strange and magical ring of stones in Scotland into the past, and had to deal with life there, knowing what she knew from the future. I’ve read books — some of them romances — based on that premise. Sometimes the heroine is just a 20th or 21st century woman dealing with the differences in gender roles between the past and present. But Outlander was also listed as “historical fiction.”

That’s the category that most caught my attention: a woman from the future, who knows about Scottish history, falls back into the past, before fateful events concerning the Scottish Highland clans occur. Does she attempt to change them? Does she leave history alone? Does she simply try to return to her own life and time? 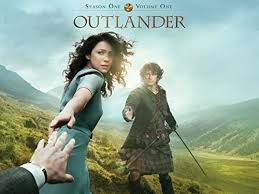 Though I had never read any of the books in the Outlander book series, I was ready to watch the show, based on the ads Starz was running. I blogged on it as a stand-alone drama, with no intention of reading the books until the show was finished and unless the show was so good that I simply had to read them, so as not to change by stance on viewing it as a drama. Unfortunately, I was not overly impressed with the adaptation as a drama. I didn’t feel attached to the woman who fell through the stones, Claire (Caitriona Balfe), to the Scottish hero from the past, Jamie (Sam Heughan), and I worried about the grief the poor husband, Frank (Tobias Menzies) in the “present” was suffering from the unexplained disappearance of his wife. 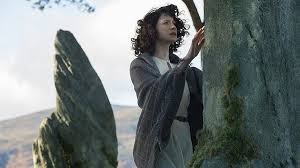 Both Sides Now: Review of the Mid-Season Finale of Starz’s Outlander & Season 1 Part 2 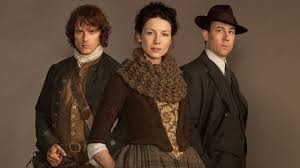 For some reason, the show’s first season was divided in half, with about a year between parts one and two. I’d never seen a show do that, so I admit that I got mighty confused when the show stopped in the middle, yet still called the next installment “Season One.” 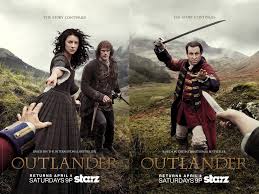 Season One Part Two of Outlander was not as coherent as Part One, which was itself already somewhat confusing. Having never read the books, I didn’t realize that Frank, Claire’s husband in the “present” of 1945, would remain in the show only as his ancestor, Black Jack Randall (in a dual role by Tobias Menzies). I guess the posters for Part Two (above) should have warned me.

What it didn’t warn me about was the irregularity of the show’s writing. Claire changed dramatically from Part One to Two. Scottish hero Jamie changed from episode to episode. The show in its entirety became more graphically violent. I was about to give up blogging on it when quite a few people contacted me on the twitter: they begged me to continue blogging on the show since my non-reader-of-the-book stance was, in actuality, validating their opinion that the show was less than stellar.

For them, I continued watching and blogging, but I admit that it was difficult to find things that I liked about the show. That’s why some of the posts went for humor: I don’t like blogging about shows or films that I simply dislike. It seems a waste of my valuable writing time. Though those fans have assured me that it wasn’t a waste of my time, there have been some who sincerely disliked what I had to say about the show, stating explicitly that if I read the books, I’d understand the show.

Nevertheless, here are the posts from Outlander, Season One, Part Two (2015): 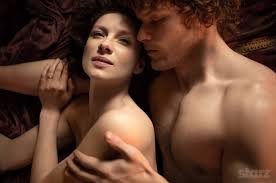 Claire and Jamie and THE JOY OF SEX: Starz’s Outlander

Give me again all that was there: Starz’s Outlander “The Devil’s Mark”

Sing me a song of a lass that is gone: Episode 14 of Starz’s Outlander 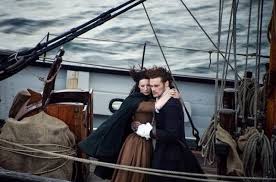 Yes, Part Two of Outlander did concentrate more on the relationship between Claire and Jamie, but as I wrote above, it was disjointed, violent, and disconnected from episode to episode. On the advice of book fans, I read the book. Then I blogged about the difference between the show and the book. I intended to do each episode of the show vs the section of the book to which it corresponded — or not, as the case was in many instances.

Until I realized it would probably take me the rest of my life to discuss all the ways the show varied from the book.

And not necessarily in a good, dramatic fashion either.

Here are the blogs about the Book versus the Show Outlander: 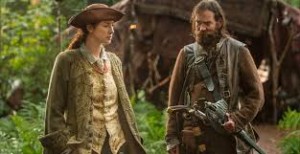 The Outlander Smackdown: Book vs Show, Part One 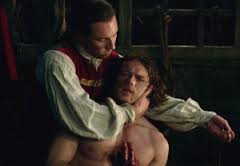 Though the show’s ratings’ fell during Part Two — which fans attributed to the year-long hiatus between Parts One and Two — and though the ratings plummeted precipitously during the final two episodes of the Second Part — which viewers attributed, most rightly, to the graphic violence, though it was also graphic in the book.

There’s a difference between reading about your hero getting raped by another man and seeing it enacted.

Fans of the book were driven away from the show.

I was not surprised. 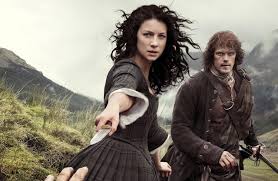 The theme song from Outlander, based on a traditional Scottish song, usually called “The Skye Boat Song,” is so lovely, it deserves a post on its own.

All that Was Me is Gone:
The History ofOutlander‘s Theme Song 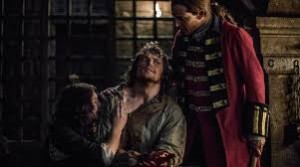 Those final two episodes of Outlander, the show, did lead me to a surprising discussion with my life-partner Tom, however, who watched those last episodes with me, in case the scenes of torture and rape triggered me. Our talk began months later, rather casually, during the film Salvation, starring Mads Mikkelsen, but quickly switched into an intense exploration of Outlander, the show, its torture, and its sexual violence.

From Salvation to Hannibal to Outlander:
One Man’s View of Men in Film & Television

Despite the fact that it’s only one man’s view of the men is some shows and films, it’s been my most popular blog post: getting over 300 thousand unique views, and over 8.3 thousand shares as of this writing.

That says something about the violence in the show Outlander, and that the post is speaking to someone.

Quite a few someones, as a matter of fact. 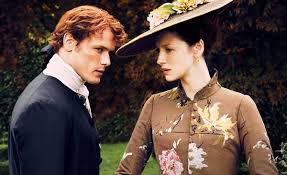 Season Two of Outlander is scheduled to premiere on Saturday 9 April 2016, and already, with the release of teasers and trailers from Starz, book-readers are complaining that the show is “going to get it all wrong.” I hadn’t planned on watching the second season of Outlander, just as I have no intention of reading any of the further books in the series. However, fans have once again begged me to “validate” their impression of the show as a non-reader and non-fan of the books.

Once again, I’ll watch the show — or as much of it as I can understand — and blog on it as a stand-alone drama. I’ve stayed away from forums and groups and posts which contain plot elements, Spoilers, etc., and won’t be visiting any of them during the show’s broadcast (I wasn’t even aware of them during the first season, so I want to maintain that same detachment in analyzing and reviewing this season’s shows).

I have noticed, though, that the book fans are already “hating” many aspects of the show without its even having aired — like Claire’s dress in the photo above, Jamie’s position in the photographs compared to Claire’s, etc.

That doesn’t bode well, either for ratings or for the fans’ enjoyment. I mean, if you “hate” something before you’ve even seen it, how will you ever convince yourself to like it, or to love it as you love the books? How will the show have a chance for success if you’ve decided to hate it before it’s even shown one episode?

I’m willing to give it a chance, despite the fact that, based on Season One, Parts One and Two, I would never have watched Season Two of Outlander.

Let’s see what you can do, Starz.

Hit me, as they say, with your best shot. 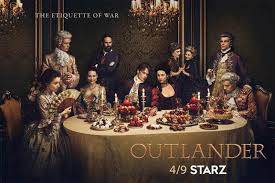