But This Isn’t a Detective Story: Agatha Christie’s Crooked House, the Film 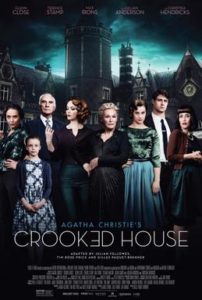 I’ve loved detective fiction since I was 6 and discovered the Nancy Drew mysteries in the bookmobile, preferring Nancy and her pals to the Hardy Boys and their adventures. Later, I dove into Edgar Allan Poe’s mystery stories without even realizing that Poe is credited with the invention of detective fiction in English, with his 1841 publication of “The Murders in the Rue Morgue,” which appeared before the word “detective” even existed. Without even knowing that I was reading a specific genre, I tore through all the works of Wilkie Collins and Agatha Christie, loving the casts of strange and fascinating characters even more than I cared about “whodunnit.” Little did I realize that Agatha Christie was considered the star of the Golden Age of Detective Fiction (1920-1949) when the whodunnit was the primary genre of crime fiction. Nor did I realize that Christie was one of the bestselling novelists of all time: I just knew she wrote lots of books and the bookmobile seemed to have all of them. Most importantly, I liked her books very much. 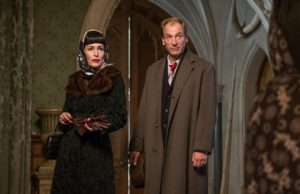 I wasn’t as interested in Christie’s plots as much as I was in her flawed but vitally interesting characters. I often guessed whodunnit and was unimpressed with many of the detectives, not realizing that the amateur or inept investigator is one of the tropes. Gosh, I didn’t even know what a “trope” was, let alone that genre authors used recurring types of characters, themes, or plot devices in their books. And I certainly didn’t realize that many of the detective stories I read had “several classic features,” such as a large, rambling country estate where a group of equally suspect characters distracted the sometimes amateur investigator (and readers) while the least suspicious character continued to commit the murders. I did, however, learn to ignore “red herrings” before I realized there was a term for it, if only because I concentrated instead on the characters themselves, little caring who had actually committed the crime. It wasn’t the murder or the initial victim that I was interested in. I liked all the people involuntarily pushed together after the crime, where they flailed and fought against their lives, against fate, and against each other. 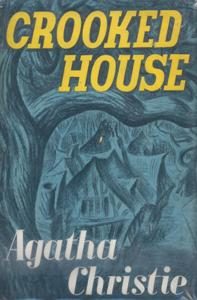 I still read mystery fiction, though these days I prefer the hard-boiled or noir genres. Again, it’s the characters that interest me, not the crimes or even the process of solving the murder. So it was with great surprise that I saw a 2017 film version of one of Agatha Christie’s classics, Crooked House, which she herself listed as one of the favorites of her own works. I’d heard of the book, and have it on my TBR list, but I hadn’t heard of the film, and I tend to notice films that are adapted from books pretty quickly, especially when the screenwriter is Julien Fellowes, of Downton Abbey fame since I so love his work. With a cast of excellent actors playing atrociously selfish and seriously flawed characters, Crooked House is one of the best films I’ve ever seen. Perhaps because I had not read the Agatha Christie novel of the same name on which it is based, I came for the actors and stayed for the characters, watching it again immediately afterward to see all the delightful ways the author — and the screenwriter — give clues, scatter red herrings, and create the kind of ambivalent characters that I adore. 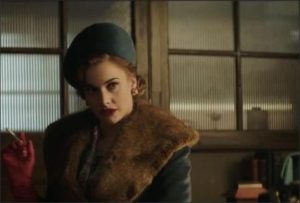 Dark and moody, the film begins with the detective’s office, where an unnamed lady is waiting, without an appointment, and where viewers immediately learn that she and the private investigator have some prior relationship. Beautiful, young, vastly wealthy Sophia Leonides (Stefanie Martini) requests that her former lover Charles Hayward (Max Irons) come to her family’s estate because she believes her grandfather’s recent death may have been murder. Further, she is afraid that the murderer is still in the house. 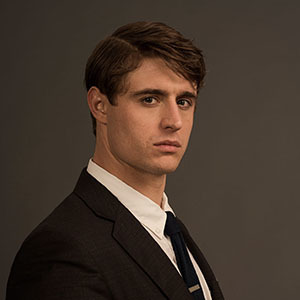 Because the investigating business is not going so well and he needs the money, because Charles doesn’t want to work at Scotland Yard in the shadow of his own famous father’s career nor under the eye of his father’s colleague, Chief Inspector Taverner (Terence Stamp), 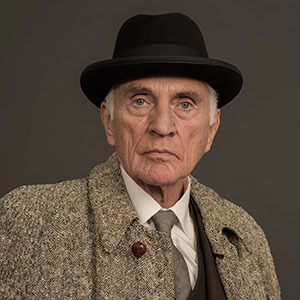 who constantly reminds Charles of how his father sat, leaned forward, looked, acted; and perhaps because he’s never gotten over being summarily and without explanation abandoned by the lovely Sophia, Charles goes to the house — the big and gorgeous country estate house — to talk to the Leonides family members. 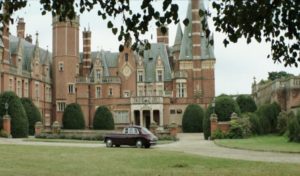 What a group! Charles immediately meets the family matriarch, Aunt Edith aka Lady Edith de Haviland (Glenn Close) who wields s shotgun like a pro and laughs at Charles’ delusions that he “saved Sophia” when the two were in Cairo. 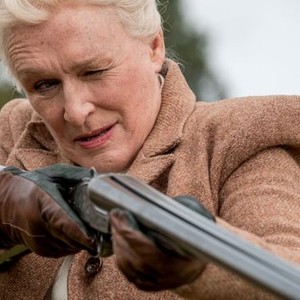 Aunt Edith came to the Leonides’ English estate years ago, from America, to nurse her dying sister. After her sister’s death, Edith stayed on to run the household, and raise the murdered man’s two sons, Philip and Roger.

All grown up, with wives and children, the boys still live at their father’s home, on their father’s money, though each has his own reasons for doing so. 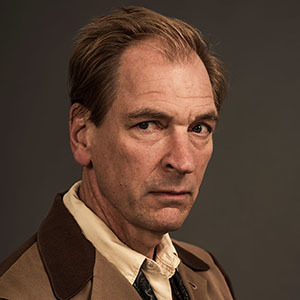 Sophia’s father Philip (Julian Sands) is an author and a playwright, who had some minor financial troubles that forced him to return home and live under his father’s controlling and manipulative domination. 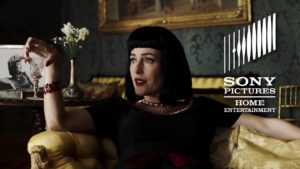 Philip’s wife — Sophia’s mother — Magda (Gillian Anderson) is a once-glamorous, heavy-drinking, stage actor who has delusions of grandeur and talent. She’s convinced she could become a film star if only her father-in-law would give them the funds to produce her husband’s brilliant screenplay, written specifically for her as the lead. Now that her father-in-law is dead, however, she fears that she will continue to wither away in relative obscurity on the estate, albeit in the company of her husband Philip, her eldest daughter Sophia, her disgruntled and angry teenage son Eustace (Preston Nyman, below), and her youngest daughter Josephine. 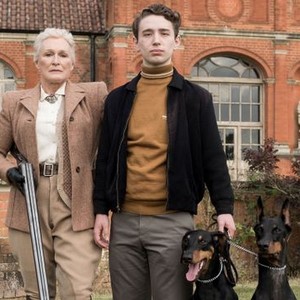 Twelve-year-old Josephine (Honor Kneafsey), who loves ballet and wanted to become a dancer, welcomes Charles to the estate because she loves to read detective fiction almost as much as she loves to spy on family members via a telescope from her treehouse. 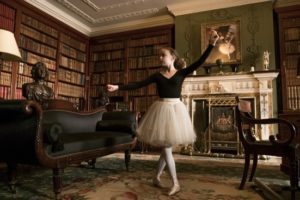 Because she then writes everything down in a journal that she never shows to anyone, her family is convinced that she is writing down their secrets. 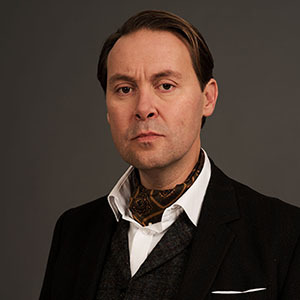 Youngest brother Roger (Christian McKay) also lives at his father’s home, ostensibly because it is he, rather than his older brother Philip, who runs his father’s business. 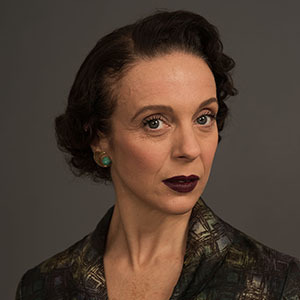 Roger is an angry young man, and though his prickly wife Clemency (Amanda Abbington) attempts without success to keep her husband’s outbursts under control, it is soon clear that both of them resent their father’s new wife more than anything else. 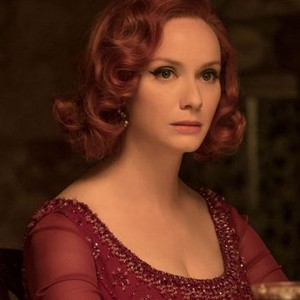 Of course, the new, much younger wife is everything you’d expect in a story like this. A former Las Vegas showgirl, Brenda (Christina Hendricks) is naïve, voluptuous, and rumored to be having an affair with Laurence (John Heffernan), 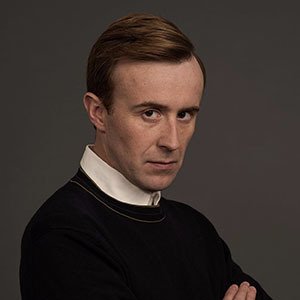 the tutor of Philip’s children Eustace and Josephine, as well as the ghost-writer of the deceased patriarch’s memoir, the only copy of which seems to have been stolen.

Now, just for fun, throw in a bumbling family attorney (Roger Ashton-Griffiths, who’s no doubt best known as the bumbling Mace Tyrell in Game of Thrones, who suddenly realizes that, inexplicably, the Old Man Leonides’ will most recent will, where everyone in the family was equitably and reasonably provided for, was never actually signed. That means everything — the estate, the businesses, the vast fortune — goes to the widow. That American, that dance-hall trollop, that Brenda, who probably — insists virtually everyone in the family — knew all about the unsigned will and so had the most motive of anyone to commit the murder in the first place.

And for even more fun and intrigue, stir in old Nanny (Jenny Galloway), who fears that she’s soon to lose her comfortable job and home because the widow, who is without children, won’t need a nanny, and because Nanny’s youngest charge, Josephine, is now too old to have a nanny anyway. Now make Nanny obsessed with getting that nasty journal away from Josephine because… well, just because… it’s a nasty, dirty book. And Nanny hasn’t even read it.

By the time Charles’ third-hand car won’t start and he has to stay the night and we get to the family dinner — the first time we actually see all the family members in the same room actually interacting with each other — this party is roaring dangerously, combustibly hot.

When Lady Edith asks Charles to tell them what a murderer is really like, he rather smugly lists a murderer’s traits as “vanity, distorted morality, a lack of empathy, and a tendency to believe they’re above the rules that govern others.” The rest of the family’s rather bored expressions, along with Lady Edith’s boisterous laughter as she quips “that description fits every member of this family,” are no surprise. After all, no one knows villains so well as their fellow villains.

A few critics felt that the cast of accomplished actors in Crooked House  “promised… more than it could deliver” or that the the film was “flawed” though a “top-notch period piece.” Emily Yoshida of Vulture described the the film as “directed with slightly sleepy, but entertainingly morbid style” and said that, ultimately, Crooked House knew what its job was and did it: “to set up a tangled web of colorful characters, throw in a few red herrings, set off its dynamite, and make its exit while the smoke is still in the air.” 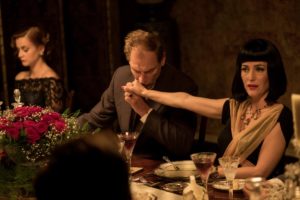 From the bumbling, naïve, inept investigator to the thoroughly despised former-showgirl young wife, from the two bickering, resentful, completely spoiled brothers to their angry or utterly vain yet bewildered wives, it is this tangled web of deliciously twisted characters that makes Crooked House worth watching. If you haven’t read the novel on which it was based, even better: then everyone in the film can surprise you.

Like me, you may find that you don’t actually care who committed the murders. Yes, murders, because, as detective-fiction fan Josephine points out, there’s always another murder. If you haven’t read the book, you’ll be both delighted and horrified when you finally learn who, actually, done it all. And while the younger stars are certainly talented, it is Glenn Close, as Lady Edith, and Gillian Anderson, as Magda, who shine as hot and bright as their characters’ falling stars.

Unfortunately, although this film is free to watch for Amazon Prime members, it is not yet available via rental, only purchase ($14.99) from Amazon, YouTube,and GooglePlay. If you do buy it, you won’t regret it.