Kevin’s Mother and the Pedophile: Protecting Children from Sexual Abuse 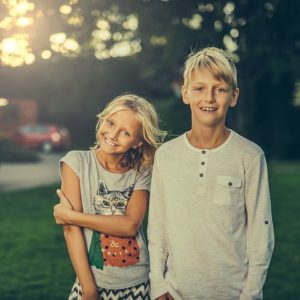 “Oh, my god, I am so angry at Walmart,” said my University colleague — Kevin’s mother — one day. “They had photos of Registered Sex Offenders on their bulletin board in the main entrance.”

“Why are you mad at Walmart?” I said.

“One of the registered sex offenders lives less than two blocks from me,” said Kevin’s mother. “Now I don’t feel safe.”

“Grateful? I know where he lives. I drove by his house last night. He was out in the yard. Some of Kevin’s best friends live next door to the guy.”

“Then you should be really grateful,” I said, “and you should do something to protect Kevin and the other children.”

Kevin’s mother looked confused. I was surprised that she’d never discussed this topic with Kevin, who was eight-years-old. I used to teach my Kindergarten students about Stranger Danger, as we called it then, before I completed my Ph.D. and began teaching at University.

“How far away is the pedophile from the school playground?” I said. “There’s usually a limit to how close a convicted and registered sex offender can go to a school or playground.”

“I don’t know what the Judge ruled as his limit,” I said, “but you still need to do something about it. Take the photo off the Walmart bulletin board for a few minutes while you go to the copy machine right inside the door [where Walmart let customers make copies for only 1¢ each], make at least 500 copies, show them to Kevin and his friends, show them where the pedophile lives, and tell them never to go near him.”

“Go to the PTA at the elementary school, tell the parents, teachers, and administrators about the registered sex offender. Then pass out copies of the poster with his photo to all of them. Everyone has a right to know that, and to protect their own children.”

“I can do that,” said Kevin’s mother, apparently thinking that would be easy compared to discussing the situation with Kevin. “Can you talk to Kevin and his friends?”

“No, I can’t. I’m not their parent. You need to do it. If something happens, the children are more likely to tell the person who teaches them to protect themselves in the first place. Don’t you want Kevin to come to you?”

“But how do I do it?” said Kevin’s mother, sounding clearly distressed.

I told her how the teachers of the private Daycare and Kindergarten had done it when I worked there. First, we told the children — as matter of factly as possible — the names of their private body parts, including the names of their genitalia (male and female) and their anuses. Some of their parents had already told them these things; some had not.

We then told them that no one — not even their parents, nurses, doctors, or teachers — was allowed to touch them in their private areas unless they were injured and needed help. Some of the children also knew this, thanks to their parents.

“I can’t touch my own child?” said Kevin’s mother.

“Unless he injures himself on his bike or something, you’d better not be touching an 8-year-old child on his genitals or his anus,” I said. “You don’t give him a bath, do you?”

“No,” said Kevin’s mother. “He doesn’t even like me to see him in his underwear.”

“That sounds normal for a little boy who’s growing up. Parents and step-parents or a parent’s boyfriend or girlfriend can sexually abuse children. Just because someone lives in the same house as the child doesn’t mean s/he can touch the child’s private parts. You need to tell Kevin that.” 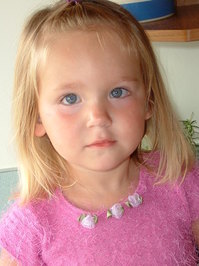 We informed the children that the pedophiles could be men or women, strangers or people known to them.

We told them some of the tricks that we knew of that were used by pedophiles to lure away children: 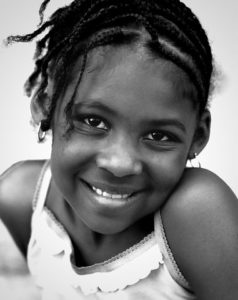 Kevin’s mother did a great job.

After she informed the PTA, the school, and the parents, she talked to Kevin and to his friends’ parents, who talked to their children with her since they didn’t know what to say. The children were all instructed to tell their parents, teachers, nurse, or doctor if someone ever attempted to lure them away, succeeded in getting them into a car or house, or — most important of all — ever touched them in the private areas. Kevin’s mother talked to his classmates after the teacher requested it and sent home permission slips which the parents signed.

Then, to her horror, Kevin’s mother realized that the convicted neighborhood pedophile lived across the street from her Condo Association’s “recreational area,” which included a playground, tennis courts, a swimming pool, as well as an indoor playroom which children used during bad weather. Many of the parents worked, so they took turns “watching” the children in these areas. Any parents with children who used these facilities had to take scheduled turns being a guardian. No child could be there without the parents’ knowledge or without at least one adult guardian.

When Kevin’s mother asked Kevin if the man in the photo, whose name and address Kevin now knew, was ever in the recreational areas. Kevin acknowledged that the man was often there, though he had no children, and was not a “guardian.”

Kevin’s mother went directly to the Condo’s Association and insisted on an “Emergency Meeting” where she passed out even more of the flyers featuring the convicted pedophile / registered sex offender’s personal information. The other parents were understandably outraged: some of them went directly to Walmart to get copies of the other local pedophiles to distribute to their fellow parents.

Eventually, they drove that convicted pedophile out of the Condo Complex, although it took some of the parents’ protesting in front of his house with signs containing his rap-sheet to get him out.

Kevin’s mother and the fellow parents did a fantastic job of protecting the children in the elementary school and in the Condo complex.

Every parent or teacher needs to teach children about sexual abuse, and from an early age. After all, we teach our children to protect themselves from fire, tornadoes, hurricanes, earthquakes, poisons, guns, bullying, and now, unfortunately, shootings or other school violence.

We need to protect them from sexual abuse, too. 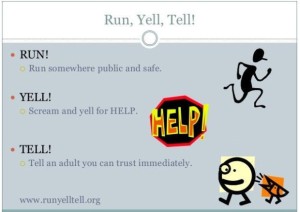 When I taught Kindergarten, we called the sexual abuse prevention program Stranger Danger, but inevitably one of the children would ask, “What if the Bad Stranger lives in the same house with you?”

Now, as far as I know, children are taught Run, Yell, Tell, which I think is an improvement over Stranger Danger, since we always had to teach the children how to react in those situations in any event, which included shouting “This is not my parent,” fighting, kicking, hitting, biting, and running away as soon as possible, and then telling a trusted adult about what had happened.

Parents may be nervous about talking to their children about sexual abuse. They may not realize the importance of teaching the children to Run, Yell, Tell! Other parents may ask you to do it for them. Give them this a copy of this post, or direct them to the Yell And Tell Foundation.

Need help discussing sexual abuse prevention
with your children?
Visit the Yell And Tell Foundation for advice,
including resources for parents and teachers. 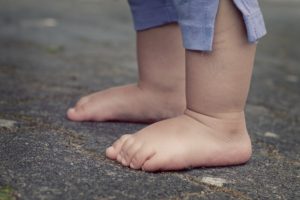 This condensed version of this post originally appeared in
OnTheVergeWithShareenMansfield (now, OTVmagazine) in April 2016.