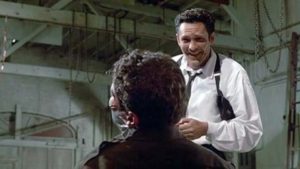 When I saw the commercials for the latest Christopher Walken film, which also stars the great Colin Farrell, Seven Psycopaths, and it looked humorous, I was really looking forward to it.

In films, as well as in literature, psycopaths have to have some sense of humor, some bizarre personality trait that the audience can find amusing or connect to — something that makes the psycopath interesting, not just scary, weird, violent, and murderous. Otherwise, it’s just not intriguing. It’s not good writing, good acting, good filmmaking…

For that reason, the seven psycopaths in the recent movie of the same name were simply nowhere near as interesting nor as freaky-fascinating as Michael Madsen, known as “Mr. Blonde”, in one of Quentin Tarantino’s earlier but better films, Reservoir Dogs.

The background to this scene, without spoilers, is that a group of seasoned criminals do a heist that goes terribly wrong, and they believe that one of their members is a “Rat” because the police got to their location before any alarms went off. In an attempt to discover who the Rat might be, Mr. Blonde has kidnapped a police officer who was at the scene, and is threatening to torture him to find out what he knows about the heist and information leaked to the police.

Before the threatened torture, however — which I have intentionally omitted in this excerpt because you have to see the entire movie to be psychologically ready for that part, despite the fact that nothing is actually shown — Michael Madsen does the “artistic” psycopath routine. Brilliantly. When Mr. Blonde Dances with the Straight Razor.

Madsen is funny, acting like he’s about to do something normal, is well dressed, handsome, smiling, and dancing (to a song most of us remember) while actually being pretty damn scary.

Whereas the seven in Seven Psycopaths aren’t funny, don’t dance — not even to Stealers Wheel “Stuck in the Middle with You,” — and aren’t even interesting.

And — Spoiler Alert — there aren’t even seven of them.