How could I have known that murder
could smell like honeysuckle?
James M. Cain
Double Indemnity 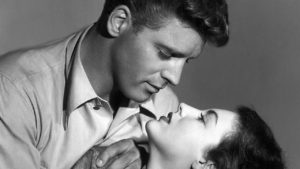 American Film Noir was most prevalent in the 1940s and 1950s, though films emulating that classic era are still being made (sometimes called Neo-noir to differentiate them from the original classics). Popular with audiences and often made by renowned directors like Billy Wilder, Alfred Hitchcock, and Otto Preminger, the films were frequently based on hardboiled detective or crime fiction, such as Dashiell Hammett’s The Maltese Falcon, Raymond Chandler’s The Big Sleep and Farewell, My Lovely, and Patricia Highsmith’s Strangers on a Train.

Shot in black-and-white with stark lighting and dramatic shadowing, Film Noir explores morality in storylines where no character is completely good or evil. Usually, the male protagonist is more bad than good, although he mostly justifies his criminal or morally reprehensible behavior, or blames it on something (or someone) else. Film Noir features Voice-Over narration, mostly from the male protagonist’s perspective, keeping the viewers clearly on the side of that character since their worldview is usually limited to that of the doomed male. 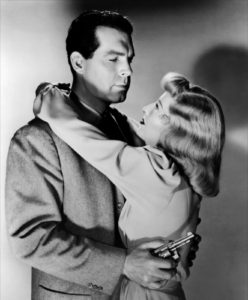 The disillusioned and usually fatalistic male wears suits or neatly pressed clothes, and is virtually always clean-shaven (day-old stubble, at most). He may be more experienced with this fists than with weapons, but he acquits himself admirably with a knife or a gun if the situation arises. Whether he’s a private investigator (The Maltese Falcon), a criminal (Little Caesar), a drifter (The Postman Always Rings Twice), or an unscrupulous insurance salesman (Double Indemnity), the male protagonist of Film Noir is world-weary, gritty, and psychologically complex. He’s had some dubious dealings in the past that make him as morally ambiguous as the female protagonist: the femme fatale. 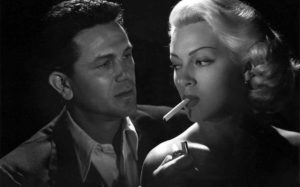 The femme fatale is a woman of questionable moral virtue. She’s often contrasted with the “good girl” or the “girl next door” who loses the male to the dangerous femme. Beautiful and duplicitous, with Hollywood-worthy costumes, impeccable coiffures, and glamorous make-up, the femme fatale ensnares the male, who is so drawn to her that he will do anything — even commit murder — in order to possess her love. Sexual passion goes along with her love, of course, but the doomed male protagonist wants the femme’s love even more than he wants her sexual fidelity. When the male is as morally dubious as the female, the femme fatale can usually out-think and outmaneuver her male counterpart.

The Film Noir classics Double Indemnity and The Postman Always Rings Twice were based on crime fiction novels written by James M. Cain. The Killers used Ernest Hemingway’s story of the same name to start the film, then supplied a gritty original screenplay with the characters’ back-story. Screenwriters, directors, and actors worked hard to keep the films as close to their literary inspiration as possible, giving audiences some of the best films ever made. 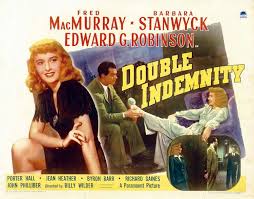 Double Indemnity opens with a gun-shot insurance salesman, Walter (Fred MacMurray), sneaking into his company offices at night to record a confession, which becomes the characteristic Voice-Over for the remainder of the film. Wise-cracking, womanizing Walter relates his initial contact with Phyllis (Barbara Stanwyck), with whom he flirts outrageously though she’s already married and, furthermore, offended by his behavior. Phyllis is not only physically striking: she’s a damsel in distress. Lonely and anxious, she’s worried about her husband’s dangerous job but helpless to protect him. When she discusses accident insurance, Walter becomes wary, but it’s too late: he’s already obsessed with the “dame.” 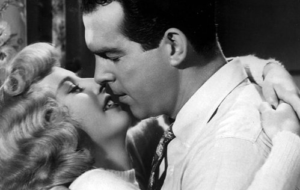 With Phyllis’ reluctant help, Walter sets in motion a murderous plan to get the girl of his dreams and a huge pile of money from his own insurance company. To really reap the financial benefits, however, the husband’s “accident” needs to trigger the policy’s “double indemnity” clause, a provision for payment of double the face amount of the policy, payable only under certain specific and statistically rare conditions. 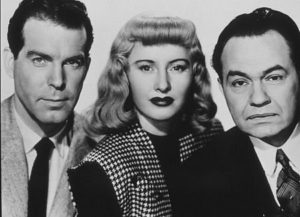 When Walter’s colleague, Insurance Investigator Keyes (Edward G. Robinson, playing against type as an honest man) and the victim’s daughter Lola get suspicious about the husband’s “accident,” Walter’s and Phyllis’ adulterous relationship and their forbidden love are severely tested.

With snappy dialogue and great acting, Double Indemnity has all the hallmarks of the Noir genre: atmospheric lighting, a morally dubious male protagonist, Voice-Over limiting the audience’s perspective to the male’s version of the tale, and the dangerously duplicitous femme fatale.

The film was closely adapted from James M. Cain’s novel of the same name, which is itself a classic of crime fiction, and which the author based on the true story of Ruth Snyder’s notorious 1920’s murder trial. Available for rent ($3.99 for 24-hour viewing period) from Amazon. 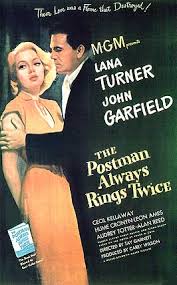 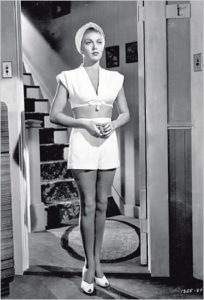 Frank takes the job offered by diner-owner Nick (Cecil Kellaway) and begins pursuing Cora, who treats him with disdain. Soon, though, Cora, who married her older husband for security, begins to fall for Frank. The couple wants to be together for the rest of their lives, but Cora doesn’t want to run away and live a drifter’s life. She has ambitions “to be somebody.” Somebody who has an established home and income. Somebody who runs a successful diner. Somebody who is a widow rather than a penniless divorcée. 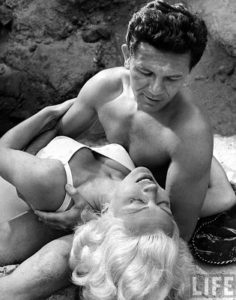 After an initial “accident” goes awry, the lovers realize that neither of them is the type who could commit murder. Their attempt at a “trial separation” and a platonic relationship prove frustrating, however, and the two decide that life without each other may not be worth living. When outside parties who suspect nefarious goings-on at the diner intentionally pit the lovers against each other, Cora’s and Frank’s love is strained and their trust in each other frays. What are they willing to do for love, and can that love survive murder and betrayal?

The title has nothing to do with the story itself, neither in the James M. Cain novel nor in the film, though the film unsuccessfully attempts to force the title to fit by pretending, at the conclusion, that the “postman” is God, who’s not present anywhere else in the film.

Cain himself claimed that he chose the non-sequitur title because he had always been nervous after submitting a manuscript for publication, and noticed that his postman always rang twice. The Postman Always Rings Twice is available for rent ($3.99/24-hour viewing period) from Amazon. 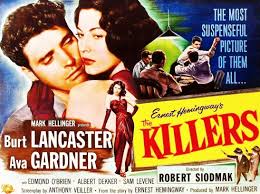 After the murder of quiet, industrious, unassuming gas station attendant “The Swede” (Burt Lancaster, in his first role) by contract killers, fellow townspeople are confused and frightened. Furthermore, they’re disconcerted by the fact that The Swede was apathetic and even nihilistic when warned of the killers’ presence and openly stated intention to murder him. 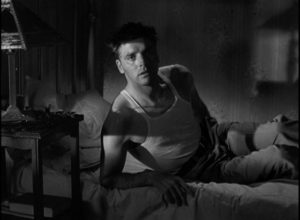 Intrigued by the reason behind the contract hit, insurance investigator Reardon (Edmund O’Brien) attempts to piece together Swede’s life story. For some bizarre reason never sufficiently explained in the film, Reardon turns “detective,” determined to unearth every aspect of Swede’s life.

Reardon discovers that Swede had plenty of secrets, including quite a few criminal missteps, any one of which could have, theoretically, gotten him killed. 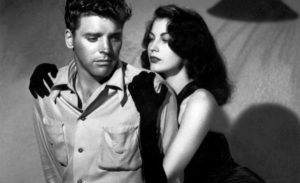 After learning about Swede’s involvement with the gorgeous and seductive girlfriend of a gangster, Reardon is convinced that Kitty Conway (Ava Gardener, in the first role that brought her extensive attention) had something to do with Swede’s death. 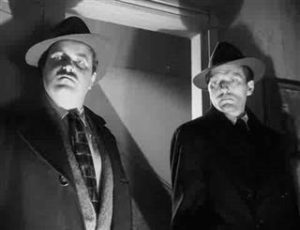 The killers in The Killers ©

The deeper Reardon delves into Swede’s past, however, the more endangered Reardon’s own life becomes, especially after he learns that Swede knew his killers personally. Can Reardon discover who ordered the hit on Swede — and why — before someone silences Reardon himself?

The first twenty minutes of The Killers is adapted directly from Ernest Hemingway’s short story of the same name, complete with the author’s distinctive dialogue (which then disappears from the film). The remainder of the Oscar-nominated screenplay is original. The Killers was considered a somewhat radical film when first released because it departed from the then-traditional narrative format and used flashbacks to tell the bulk of the story. Available for rent ($3.99/24-hour viewing period) from Amazon.