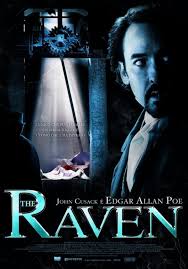 I’m not sure why the 2012 film The Raven doesn’t have at least 9 out of 10 stars on popular reviewing sites because it is one of the best takes on Edgar Allan Poe and his stories that I’ve ever seen. If you know anything about Poe, you know he is credited with inventing the detective story, and he is famous for some of his scary tales, like “The Pit and the Pendulum,” “The Cask of Amontillado,” and “The Murders in the Rue Morgue,” many of which were made into somewhat cheesy 1960s horror films starring Vincent Price. As a fan of Poe’s since I was 11, when I first read all of his works, I was surprised that I’d never heard of the film, starring John Cusack as Edgar Allan Poe, in an interpretation where the drug-addicted and alcoholic writer is redeemed by his love and self-sacrifice for his fiancée. 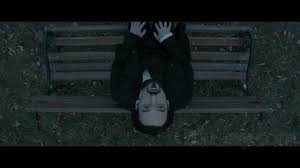 The film begins and ends with this enigmatic scene: Poe sitting on a bench in the middle of a public park, motionless, gazing upward. The scene then switches to officers responding to the screams of a woman. When they break into the locked boarding-house room, they discover bodies but no assailant; they find a window nailed shut. Viewers familiar with Poe’s work will immediately recognize the scenario from Poe’s  “The Murders in the Rue Morgue.” Even if you’re not familiar with Poe’s tales, however, you can certainly enjoy the film, in which a literate serial killer seems to be trying to implicate Poe in murders that come from his published stories. 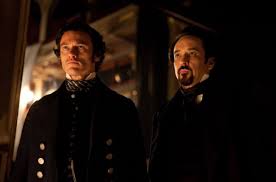 Inspector Fields (Luke Evans, L) recognizes the stories from which the crimes are mirrored, and when he calls in Poe for questioning, it becomes apparent that the author is not the killer. Fields then enlists Poe to help him and his men solve the crimes. 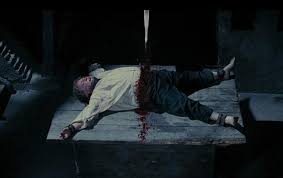 Poe’s involvement in solving the crimes is complicated by the presence of his fiancée Emily (Alice Eve), whose father, wealthy Captain Charles Hamilton (Brendan Gleeson) doesn’t know about their relationship or their secret engagement. Furthermore, Hamilton wouldn’t approve if he did know of their love. When the mysterious killer kidnaps Emily and gives Poe clues to her whereabouts, Hamilton is forced to work with Poe, whom he dislikes, and with the Inspector, to save Emily.

The film is genuinely gripping suspense, even if you are familiar with the Poe stories on which the killer is basing his crimes. Additionally, though Cusack sometimes seems to be a bit unemotional in his delivery of some lines, his Poe is fascinating. Cusack’s Poe has a temper, he’s jealous of “hacks” like fellow-poet Longfellow, he’s experiencing writer’s block that prevents him from earning sufficient money to formally request Emily’s hand in marriage, but in The Raven, this Poe is transformed from a drug-addled failure to a clever, romantic hero of admirable proportions. In the 2012 film The Raven, Edgar Allan Poe is worthy of respect and admiration, no matter his personal failings. 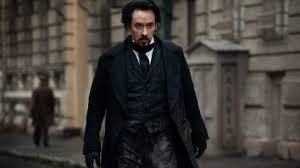 The Raven is airing Friday and Saturday 2-3 December on Starz, and is available any time on Starz on Demand. The film is also available for $2.99-3.99 on these providers: YouTube, iTunes, Vudu, Amazon, and GooglePlay.

Watch it with the lights out for best creepity effects, my Lovelies, and enjoy the official trailer.