First of all, I must admit that I have never read any of the books in the Diana Gabaldon Outlander series, so any reviews I write will be based strictly on the Starz adaptation, and no comparison with the books will be attempted. There are always fans of the books who don’t like the series and vice versa, as HBO’s TrueBlood, adapted from Charlaine Harris’ Sookie Stackhouse Southern Vampire novels demonstrate. I watched that series without ever reading the books, and given that the first novel in the Outlander series weighs in at a hefty 800+ pages, I don’t think I’ll be able to finish it before the series continues. From the first episode, however, I have to say that Starz is taking an incredibly bold and daring step for a premium channel: making a series that seems devoted primarily, if not entirely, to female viewers. I have to say that I find the entire concept of Outlander interesting, especially since I wasn’t aware until recently that so many Romance novels included time-travel (would that be fantasy or science fiction?) in their themes. Since I’m familiar with the tremendously well written and interesting Lesson series by Jennifer Connors, I was happy to give Outlander a hearty go.

In the Connors’ series, the romance-mocking heroine time-travels at the end of each novel — once she and the hero of the book in question have fallen in love and married or otherwise joined their lives together — only to find herself in a completely different time period facing yet another hero which requires her wit and adaptability, and tests her courage, independence, and modern 21st century feminism. From the photos released by Starz, it looks like Outlander will only be set in two periods: post-war 1945 and 1740s, but both locales seem to be the same, the Scottish Highlands.

Still, given that Claire is a nurse during the war with recognized skills, and given her droll sense of humor whenever she seemingly playfully mocks her husband Frank’s interest in his own geneology, Claire seemed the right kind of heroine to make a time-travel romance fascinating, especially since the novel is sometimes listed as an historical drama, and I like history.

The premise is simple enough, and the voice-over of the opening of the first episode was compelling:

People disappear all the time. Ask any policeman. Better yet, ask a journalist. Disappearances are bread-and-butter to journalists. Young girls run away from home. Young children stray from their parents and are never seen again. Housewives reach the end of their tether and take the grocery money and a taxi to the station. International financiers change their names and vanish into the smoke of imported cigars. Many of the lost will be found eventually, dead or alive. Disappearances, after all, have explanations. Usually.

(This is from the Starz Tie-in version of the novel, and may have been added since the original book doesn’t appear to have this “prologue”.)

Claire and her husband Frank, separated for at least five years because of the War, have gone on a “second honeymoon” to the Scottish Highlands to “reconnect” (and so Frank can research his direct ancestor John “Black Jack” Randall, a politically protected British military leader who attempted to quell Scottish uprisings: Tobias Menzies plays both Frank, in 1945, and Black Jack, in the 1740s).

But it disturbs me that Claire doesn’t seem to take Frank’s interests seriously, especially as he investigates his own family history in the Highlands or tells her some of the history of the places they’re visiting. She almost seems to mock him at times — I thought I even caught some eye-rolling on her part — so I began to wonder why exactly they had to “reconnect” after the War. I wondered if the reason they needed to “reconnect” had to do with something other than their only seeing each other 10 days in the past five years.

In any event, I pushed those faint disturbances aside as I continued watching the episode. The scene where Frank and Claire spy on the women re-enacting an ancient Druid rite at a Henge of stones was exotic and lyrical. The choreography and music were haunting and effective. In this scene, as in the opening, Claire’s voice-over also worked well: “I had a feeling I didn’t belong there.”

Unfortunately, it was also at that moment, I knew my boyfriend would never be watching Outlander with me. The Henge dance was basically a lovely and haunting Celtic ballet, and as much as I liked it and found it moving, I knew that had he been there to see it, that’s the time he would’ve picked up a book and started reading. (Like the Emperor Franz Josef in Milos Forman’s Amadeus, who “doesn’t like ballet in his opera,” my boyfriend doesn’t like “ballet” in anything, but especially not in historical dramas, which he loves.)

Yes, Starz is being very daring, attempting to make a series for a predominantly female audience. But I’m female, and I find that kind of gender-specific genre drama rather dull. Still, I have my fingers crossed. The series is based on a set of best-selling novels, and how could more than “25 million readers” be wrong?

When Claire returns to the Henge, ostensibly to gather a flower, and touches the center stone, she is inexplicably transported back in time to the same place, circa 1740s. When she regains consciousness, she is in the past, confronting both Black Jack, whom she first mistakes for her husband Frank (Tobias Menzies in a dual role), and a small group of Scottish Highlanders, among them Jamie (Sam Heughan). As the prettiest person in the series, the only male in the past with relatively short hair and virtually no beard, I quickly gathered that he will become Claire’s love interest and/or conflict in the past.

In fact, virtually all the images available for Outlander involve Claire and Jamie, or Claire and the 1740s Scots, not even the British Black Jack, so I assume that will be the focus of the show. I’ve heard that it’s historically accurate and well-researched, and I hope that’s true because I love a good historical drama, like Starz’s Spartacus where, though we know little about the major real-life players, a brilliant drama was constructed around the basic facts of their lives. 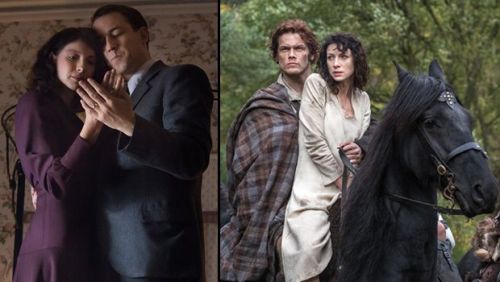 There were many things I liked about the first episode of Outlander. Frank is an interesting, intelligent, smart, complex man. Claire was a nurse, and a competent enough one that, in the War scene, I thought she was a doctor and almost whooped for joy. Still, she knows enough to help the wounded Jamie after she’s time-transported to the past, and she has a nice cursing vocabulary on her: one that astonishes the Scots, who claim they’ve never heard a woman talk like her before. I like that in a woman.

Claire seems also more sensitive to the energy of the Henge — the earth, the Universe, whatever — than her husband Frank. After the dance, he, too, touches the center stone, but then starts jotting notes in his little tablet. (She touches it later, when she returns alone, and is jolted out of her present life into the past.) She’s not afraid to speak her mind, even when surrounded by male strangers who look quite the ruffians. She uses her medical knowledge to gain their trust. When she uses the historical knowledge about British ambushes that she gained from Frank, she earns a bit of trust from the Scots but also makes them wary. They suspect she may be a spy. She quickly learns when to be “seen and not heard.”

The foreshadowing in the series is subtle but effective. Frank tells her he kept drawing the lines of her palm during the War — he doesn’t know why — then the Reverend’s wife or housekeeper reads Claire’s palm and comments that the lines are unusual, connecting the two scenes. I hope the lines of her palm, which are repeatedly described as unusual or memorable, will have something to do with her survival in the past as well as with her return to the present. Or at least with the Henge stones and why she was transported when she touched them, but Frank wasn’t when he did. I’ll just have to wait and see, as will anyone who’s not read the novels.

Claire’s not the typical romance novel heroine in terms of her looks, and I admire that. These days, it seems almost obligatory that the heroine have raven hair, green eyes, and a buxom figure, no matter where or when the novel’s set, and it’s refreshing to have a dark-haired, dark-eyed actress, with a sometimes pout but an otherwise ordinary face, and quite a thin body (too thin, in my humble opinion) playing the lead role. Caitriona’s Claire is tall, feisty, and pouty. I like those qualities so far. She’s smart and takes command whenever there’s a situation that requires her knowledge or skills to save someone or to prevent slaughter. I like that, too. Most of the men, including her husband Frank, seem taciturn so far, while she’s the articulate one. I really like that, and just hope it doesn’t become a cliché — with all the men being sort of brutish, brainless hulks with only nice bodies and good fighting skills.

The Scots are protective of her — they prevent her being raped by Black Jack, and the clan leader won’t condone “rape” when the men suggest “testing” to see if she’s a whore; then the man who saved her from Black Jack ventures his opinion that she’s “no whore.” Even though, curiously, the Scots don’t question her anachronistic hairstyle, dress, shoes, jewelry, or (slight) makeup; and even though they fear she may be a British spy, they still defend her honor and her body. And they instantly obey her whenever she goes into her “Nurse” role, so they accept, without question, that she has more knowledge of some things than they, simply from the tone of her voice. That makes me like the male characters so far.

Alas, however, I won’t be able to share Outlander with my boyfriend. Despite the fact that rifles and pistols, swords and knives, running and chasing, shooting and potential violence abounds, he’s declined to watch any of the repeat showings. He said he “read what it was about” in the description. That is not a good sign. I attempted to tell him some of the things that happened in the premiere episode. He looked blank and more than mildly bored. It doesn’t look like he’ll even give Outlander a chance. He wouldn’t even watch the Outlander trailer.

That’s quite a risk for Starz, doing a show that seems aimed primarily at a female audience, because many females, like me and all my educated, career-women friends, don’t necessarily like gender-specific fiction. I like all kinds of fiction, as do they. I like history. And I wouldn’t like to see Outlander degenerate into a formulaic romance where a woman who, for some unspecified reason, has fallen out of love with her husband, whom I found to be the most intellectually and physically attractive man in the show, to fall in love with a man from the past just because he’s pretty and brawny and rides a horse and has a Scottish accent and speaks Gaelic.

If you missed the first episode last Saturday, and haven’t caught any of the reruns, Starz has it available on its website free of charge: you don’t have to be a Starz subscriber to watch the premiere episode of Outlander. It airs Saturdays at 9 p.m. ET.

Meanwhile, I’m keeping my fingers crossed, and hoping Outlander, despite some of my misgivings from the first episode, becomes more of a Starz Spartacus historical drama than a Lifetime femme-in-jep movie of the week.