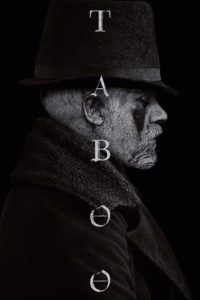 FX’s daring new drama, Taboo, premiered last night, and it was everything the official trailers promised: moody, atmospheric, dark, and somewhat creepy. Produced by Ridley Scott, Tom Hardy, and Steven Knight, the initial episode takes viewers to a dark and frightening 1814 England, where the entire world is terrifying, much like that of Mary Shelley’s Frankenstein (1818), and nothing like the world that appears in the contemporaneous novels of Jane Austen. 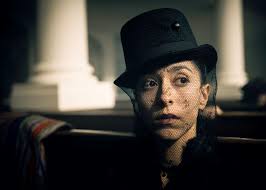 Instead of worrying about getting herself a husband, the major female character in Taboo, Zilpha (Oona Chaplin) is already married, and when her half-brother, James (Tom Hardy), returns to attend their father’s funeral, she seems terrified. Everyone assumed that James Delaney was dead, since he’d gone to Africa at least 10 years previously, and they’d heard rumors of his death. Everyone has heard rumors of other things about James, too, and you can bet that none of them is good, even if viewers do not actually hear any of those rumors in the premiere. 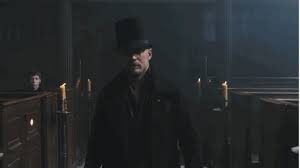 James, the sole beneficiary of his father’s will, is left nothing except an island off the west coast of America, an island that both Great Britain and the United States want, an island James’ father “bought for beads” from Native Americans at the same time he “bought himself a wife.” 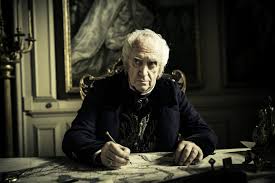 James’ sister’s husband only wants the land so that he can sell it to the East India Company, and the owners of that company, led by Sir Stuart Strange (Jonathan Pryce), are outraged that James will not even consider their purchase offer. Sir Stuart Strange and James have a past together, albeit one that Strange cannot recall since it happened when James was a boy serving the company in Sir Stuart’s regiment. It’s clear from the beginning, however, that Sir Stuart is a man who is not used to be being even disagreed with, let along thwarted. 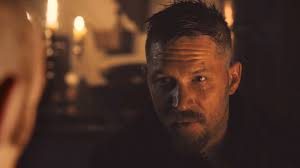 James roams around the spooky, grimy, littered streets and docks of London as he attempts to take back his late father’s holdings. He also discovers the cause of his father’s death. And, nope, you guessed it, his father didn’t die of old age.

Now, indeed, we have more than a “standard-issue revenge tale, jazzed up.” We have a “one-man menace machine” in Hardy’s Hamlet figure — returned from the dead, half-dead, or possessed by spirits — who neither dithers nor dallies, and who frightens the bejeezus out of everyone else he encounters. 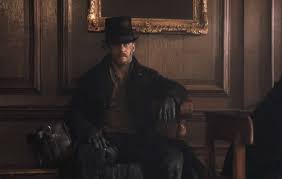 The production itself reminded me of Penny Dreadful combined with Deadwood, and it was atmospheric, brooding, spooky, and menacing. The only complaint I had was that sometimes I found it difficult to understand what Hardy was saying. Was it because of his accent? Was it because he seemed to be virtually whispering all his lines? I’m not sure, but whatever the reason, it was a minor enough inconvenience. I’ll certainly be watching this gripping story again, if only to discover exactly what’s taboo in this story (I think I know already, but don’t want to ruin it for anyone), and see why everyone’s so afraid of James Keziah Delaney.

Taboo airs on FX on Tuesdays at 10pm ET. Available any time on FX (first episode free with Preview Pass) or free for DirecTV subscribers. Rated very Mature for language, violence, and nudity.