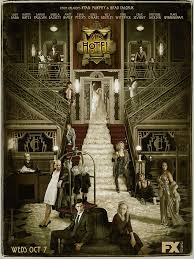 Though lots of critics, reviewers, and bloggers lambasted the premiere episode of FX’s American Horror Story: Hotel — the fifth installment of the anthology series written by Brad Falchuck and Ryan Murphy — calling it everything from “Garbage” (Vanity Fair) to “The Unbearable Excesses of Ryan Murphy” (Hollywood Prospectus), from “The Lady Gaga Show” (io9) to the Best Lady Gaga Video in Years,” (Gawker), the premiere episode of Hotel was a violent, intense, somewhat bizarre but fascinating mélange of a new horror story blended with allusions to famous horror films and to the past seasons of its own franchise. 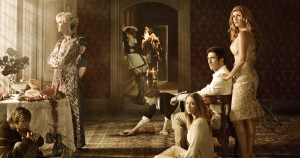 It doesn’t look like Hotel is going to be any different. 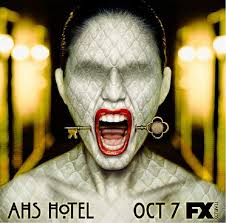 From the moment two Swedish tourists (sisters, I think) enter the hotel Cortez, tingles go up your spine. The carpet in the entry hallway — 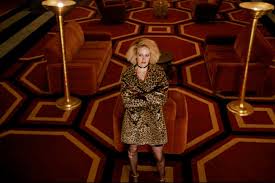 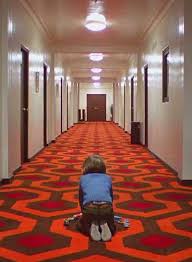 might lead you to feel uneasy enough, but the fact that the hotel seems deserted might also make you more than a little nervous. 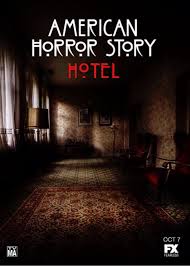 Because the ill-tempered manager Iris (Kathy Bates) refuses them a refund, the girls try to make the best of it. For one night only. 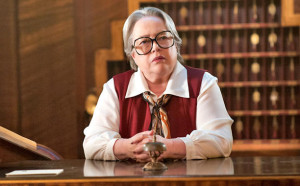 Iris shouts for “Liz Taylor” (Dennis O’Hare, in his most daring role to date), to lead the girls up to their room. 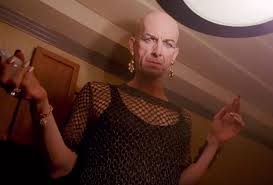 Let’s throw in an allusion to that creepy, long-nailed Dracula hand sneaking up behind Jonathan Harker — from Francis Ford Coppola’s Bram Stoker’s Dracula — 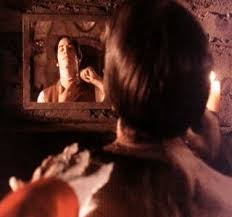 when one of the girls goes to the ice machine. 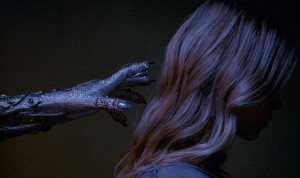 Then let’s have her sister freak out that the “room stinks,” identify the smell as coming from the mattress, which she cuts open, 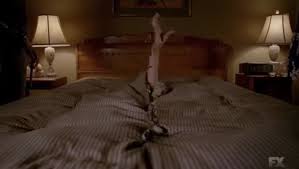 and have a screaming gimp pop out. 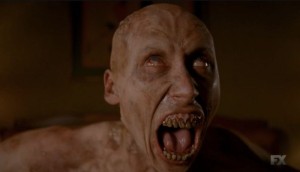 We sure didn’t want to change the channel. 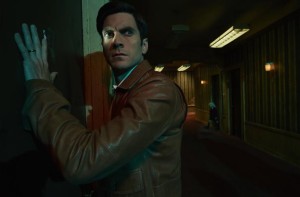 Switch to a John Lowe (Wes Bentley), who is investigating a series of murders committed by The Ten Commandments Killer, who is called to a crime scene involving a couple.

“They’re married,” says Detective Lowe, “but not to each other.”

The woman, who is on top, has been spiked to the headboard of the bed through her hands. The man’s eyes and tongue have been cut out and left in the ashtray.

The police officer thinks the guy is saying, “Get me out of here.”

His Viagra-enhanced genitals have been SuperGlued inside the woman.

And also an allusion to Se7en, when the highly literate serial killer murders his victims according to the Seven Deadly Sins, and in appropriate fashion. 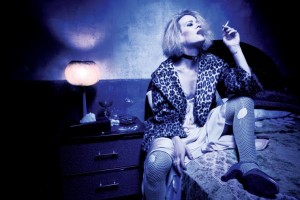 a drug addict who once lured Iris’ son Donovan (Matt Bomer) into a room and an overdose, causing Iris to push her out the window, killing Sally.

After another drug addict (Max Greenfield, in a brief and horrifying role) checks in, 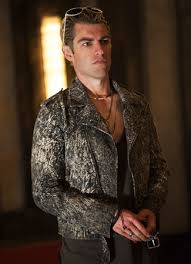 he’s raped/sodomized by a disguised figure with a metallic strap-on. Sally kneels at the bedside, telling him that his screaming will only prolong the rape, and requesting that he tell her he loves her.

In answer to the other critics’ and bloggers’ objections to yet another prolonged, explicit, violent rape scene (male or female) in American Horror Story, rape does seem to be a bit of an obsession with one of these writers, if not both of them. Eric Thrum called the scene “sickening and pointless,” and I have to agree. The rapes scenes throughout the history of American Horror Story’s seasons do seem to be “another instance of TV shows using rape to lazily create shock.” The scenes never seem directly connected with any social, sexual power/submission, or political commentaries, or even integrally related to the plot (except perhaps in season one, where the character was pregnant from the rape, and the child wasn’t her husband’s, as she’d thought).

Maybe the problem with many of the rapes on TV, and especially with those in American Horror Story, is that I’ve gotten so used to them, they often have no effect on me. Perhaps it’s because they often involve disguises and costumes in this show, with the rapists/perpetrators being ghosts… I don’t know.

And coming from a fifteen-year-victim of incest-rape (father, step-father, and mother [with implements]), that’s saying something gruesome about television’s — and American Horror Story’s — portrayal of rape.

In an homage to The Hunger, starring Catherine Deneuve, David Bowie, and Susan Sarandon, 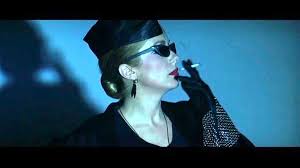 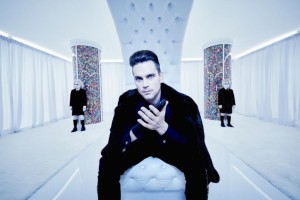 is now the lover of  Elizabeth (Lady Gaga), also known as “The Countess,” who currently owns the Hotel, but has just, apparently, sold it. 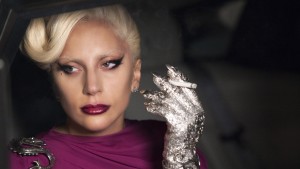 Donovan and Elizabeth, engage in sexual activities with strangers as well as with each other, 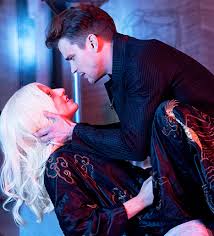 as do the characters in The Hunger,

as do the characters in The Hunger. 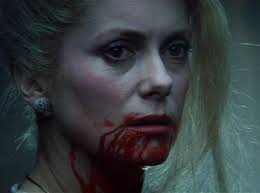 Donovan and “Countess” Elizabeth (no doubt named after Countess Elizabeth Bathory [Erzsébet Báthory], one of the most prolific serial killers in history, who killed young virgins and bathed in their blood ostensibly to preserve her youth, and who is often compared to Vlad III the Impaler, on whom the fictional Count Dracula was partially based), are not only murdering, blood-drinking lovers, but they also seem to collect children, 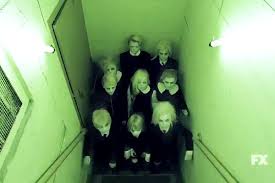 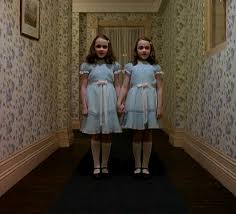 and which include the missing/kidnapped son of Detective Lowe and his wife Dr. Alex (Chloë Sevigny), whose marriage is suffering because of the loss of their son. 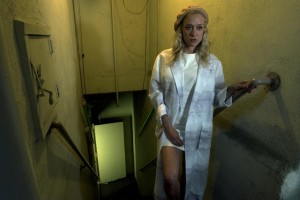 Hotel was scary, creepy, and spooky. It was filled with allusions not only to its past seasons’ stories, but also to horror films, serial killer films, and historic serial killers. My strong objections to the pointless and graphic rape scene are noted above. Besides that, American Horror Story: Hotel rocked with atmosphere, and not just because of the claustrophobic camera angles and close-ups, and not just because the song “Hotel California” played over the end-credits, leading us to believe that all the “guests” have become permanent residents, crossing the boundaries of time and now forever in each other’s paths, just as in the first season of the series. (Airs Wednesday nights at 10 ET on FX.)